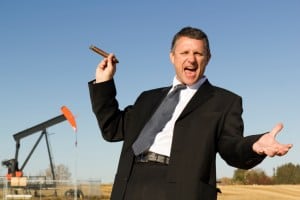 I once had someone tell me that the major reason they didn’t believe in climate change was that scientists would do or say anything to get grant money. That their motivation was simple greed. The system was rigged. I was a little surprised.

In my experience, we humans are not often rational beings. We tend to believe ideas that fit our world view and are often motivated by fear or group think. We have come to distrust our institutions, especially government after a long concerted campaign of negative rhetoric.

The term “rigged”” has been popularized by our climate change denying president-elect. It seems to me that it plays to our paranoia, but you know what they say about paranoia.

We have come to live in a post-factual world. That’s the cynic in me. On the other hand, if anything is rigged with respect to climate change, consider the following facts:

So who has a vested and monetary interest in promoting carbon based fuels and denying their impact on climate change?

Seems like Trump is rigging the deck with Rex Tillerson, Exxon’s CEO, as Secretary of State. Do we think he’ll be objective on the $300M oil deal Exxon wants with Russia? How about oil drilling advocate Rep. Cathy McMorris Rodgers as Secretary of the Interior? Maybe she’ll allow drilling and mining in National Parks? They’ll join recently-appointed Scott Pruitt, a climate change denialist, picked to lead the EPA. These are not just ordinary appointments. They are designed to line the pockets of the rich oil companies. Seems like more motivation than a few grants?

Senator James Inhofe, R-Oklahoma is chairman of the Senate Committee on Environment and Public Works. He is a typical example of a politician who denies climate change. You might be surprised to learn he has received almost half a million dollars in campaign contributions from oil (OpenSecrets.org) over the last five years. Does he have motivation to look at the facts objectively?

In Florida, a state already becoming a casualty of climate change, there is a utility based initiative on the ballot which helps kill solar power. (Google Florida Amendment 1) Hmmm? Part of the billions in lobbying spent by energy companies? Why would anyone want to kill jobs and prevent free renewable energy? Get your waders ready Floridians, Miami is in kill zone for sea rise and has already experienced flooding.

The good news is that most Americans still trust scientists. According to the Carsey Institute in a survey of New Hampshire residents, about 2/3rds of residents say they trust scientists to provide accurate information about environmental issues. That’s why most Americans 73% understand Climate Change is real and we need to do something about it. Despite what deniers say, the scientific evidence is overwhelming.

The politics of climate is not likely to change when the game is “rigged” with $4.03 billion in lobbying efforts in favor of continuing to pump oil and retard adoption of renewables. There is no denying we need oil, but we have safer, and now cheaper options for a large part of our energy needs. Do we really need to export oil to other countries?

Yet, arguing the politics of climate change, as I am, won’t help us make progress toward renewable energy. And the other side is not stupid. Calling them idiots only entrenches their position and causes them to spend more money to create doubt, so you will buy their BS. I believe we got the same thing from Tobacco companies.  “There is no link between tobacco and cancer.”

But voting and calling your representatives and senators will help. There is collective wisdom in the American people and they hate being flimflammed. They are being deceived like never before. Spending a little time looking behind the smoke screen is a good idea. Getting out and working for what is right will help too. So will starting to examine your own carbon footprint and what solutions are available.

Politicians and businesses that are on the wrong side of this issue will pay the price. But not as much as we will. We are slowing cooking our children and our unborn grandchildren. History will judge the politicians for what they are, at minimum, short sighted, greedy and afraid. At worst, for crimes against humanity. Our children will judge us for what we did or didn’t do to prevent catastrophe.