The War on Renewable Energy

The War on Renewable Energy 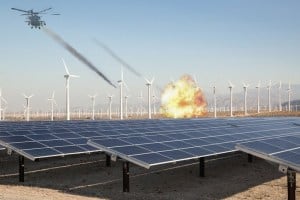 There is a war on renewable energy. It’s being conducted by a combination of fossil fuel companies, power companies and the uninformed legislative representatives they have in their pockets.

I’ve always been a free market capitalist… with reservations. I understand and welcome competition. I even understand that there need to be common sense regulations or incentives that help us all from the excesses of an uncontrolled free market. (Think Enron, Pacific Gas and Electric, or the Large Banks in 2008.) Having just discussed the competitive international disadvantage of a reliance on fossil fuels, what I can do is speculate why these entities would fight against renewable wind and solar. It is ignorance and greed. Unfortunately, the consequences to me and you come at a tremendous cost. Both to the climate and to your pocket book.

So you don’t think I’ve gone off the deep end as a conspiracy theorist, or that I’m exaggerating, let me give you a few random examples.

These patterns are repeated over and over across the country. Lobbyists, funded by the oil and power utilities, provide backdoor donations to weak politicians in return for creating barriers for solar, wind, and other renewable energy.

The tragic is revealed in an Op-Ed in the Washington Post by Sheldon Whitehouse, Senator, RI. “Talking to my Senate Republican colleagues about climate change is like talking to prisoners about escaping. The conversations are often private, even furtive. One told me, “Let’s keep talking, but you can’t let my staff know.” This article goes on to say, Republicans, the pro-business party, have introduced climate change bills in the past, but since the Supreme Court up-ended a century of law with Citizens United, billions of dollars have been spent by fossil fuel and utilities to stall renewables and get over $700 Billion in subsidies for these same companies.

Solar and Wind are new technologies with tremendous potential. They’ve already come close to cost parity and sometimes passed it compared to fossil fuels. They don’t need more barriers thrown in the way. Why? Because, fossil fuels are rapidly killing the planet. Because fossil fuels are costing you and me more. Because our security is dependent on getting free of oil. We need to transition off as much fossil fuel, as fast as possible.

Creativity, problem solving, innovation, fair play, and hard work are all American virtues. We have an entrepreneurial and pioneering spirit and don’t like it when business, government or others put roadblocks in our way, or tell us what to do. The message to our legislators should be, “Lead, Follow, or Get Out of the Way!” Don’t be flimflammed, let your representatives know they can count on you, to break free of fossil fuels and support solar and wind. It’s the right thing to do.