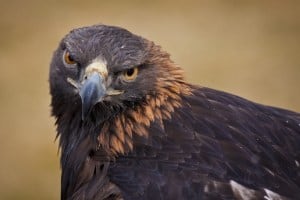 What’s the life of a single golden eagle worth? It’s an unfair question, but the one I ask, Steve Slater, director of Hawk Watch International (HWI) in Salt Lake City.

There are two answers he says. The first, is that there is value in all life. The second, is a little more complex.

Steve has been with HWI for 11 years. He grew up in Michigan, in the suburbs, near the woods. He taught himself how to read by devouring National Geographic. His parents had bird books in their house, which he studied, but what he really wanted was to study wolves. Later, he developed a passion for birds, which helped him focus his PhD research.

It’s easy to see his passion in the detail of his answers. He warns me to reel him back when he gets too deep. I recognize a fellow nerd when I hear one. Since he is under contract with SPower, the owner of the wind farm in Monticello, UT, he speaks of his experience with other wind farms around the country. There are two ways to come at the story, he says. From the standpoint of wind energy, and from the standpoint of birds. 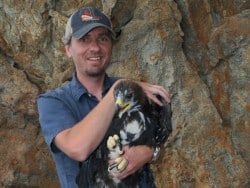 The process of “siting” a wind farm is a complex and timely process. It’s impacted by multiple Federal and State agencies. Two organizations that are often involved are the Bureau of Fish and Wildlife (FWL) and the Bureau of Land Management (BLM). When a wind farm site is proposed, it often requires a year’s study of local fauna. Oil and gas are more straightforward. Is there a prairie dog colony where you are building? No, OK. If the power company has not shown due diligence and an eagle is killed, they can be severely fined.

Show good faith and you may be able to get an “Eagle Take Permit,” from the FWS. In other words, if an eagle kill is unavoidable, and you can estimate the number from surveys, then the power company may be able to offset those kills with projects aimed at saving eagles elsewhere. For example, providing insulation on electrical poles and towers so eagles don’t electrocute themselves while perching. The boundaries of the cooperation between FLS and power companies are soft. Everyone is focused on trying to do the right thing, each dancing with the other.

I ask Steve about the population and mortality of Golden Eagles in the west. He says there might be between 30,000 and 50,000 in the USA. While Bald Eagles are rebounding, the Golden numbers are fewer and declining. They face mortality from a number of sources; change in climate which affects prey, impact of lead shot since they are also scavengers, and lastly, impact of vehicle collisions.

He says that ravens are quick enough to move when a semi-truck comes down the road as they feast on roadkill. But eagles are single-minded or too slow to get out of the way. A simple solution would be to move the roadkill, even twenty yards away. Who is going to do that?

I ask him if there aren’t ways to repel eagles from wind turbine farms. He says there are a number of experiments that are underway. However, from a project in California, they’ve learned what not to do. i.e. Not mow around the base of the tower which otherwise allows prey to scurry beneath the death zone. Indeed, there’s an RFP for a camera based system which senses incoming eagles and tries to warn them. He adds, but what if they are already within the wind farm? Will it repel them back into another turbine they’ve passed? It’s not easy.

Why can’t eagles, with their ability to spot prey from a mile away, just see the blades and avoid them? I ask. His answer is ironic. The same reason you can’t text and drive. The eagle is focused on the prey. It doesn’t see anything else. That’s the way evolution has wired it.

I ask him if spotting and stopping the turbines is effective? He sighs. Sure, I suppose we’d save a few eagles. Know, however, that the models say that the kill ratio is 1% for eagles flying into wind farms. An eagle has to fly through 100 times before the technique might save one. The Golden Eagle is the marquis species. A bigger problem is smaller birds and bats. We have more song birds. They are not as dramatic. Neither are bats. He wanders off down a path describing turbine color and insect attraction. It’s clearly complex.

For now, the rise of wind power and nature is a delicate balance. He says they are still developing the information needed to make the best decisions. Everyone is involved. It’s clear, Steve is searching for more data and answers. It’s what he does. He’s a scientist.

Science helps develop an objective truth that build trust. Trust helps us put in place policies that make sense for everyone. That’s the way our system should work, though we may have had a few collisions along the way. In the end, we are all connected. The scientist, the policy makers, the power companies, and even the politicians. At the center is life itself. Our life, and the creatures we depend on and with which we share the planet.