The lake is a mirror to the universe. I can not tell where the sky begins and the water ends. There is no boundary. The sun dips below a reef of clouds and the world turns orange. The earth turns and Venus rises as it’s twin reflection sinks.

We are sitting on an island of rock in Silence Lake, Quetico Provincial Park. It’s been a long paddle and a good day. At 12 and 15, my brother Jimmy and I are on our own adventure. We are explorers now, and think of ourselves as men. Or at least pretending to be.

We came up Agnes today. Twenty miles and four portages from Moose Lake, passing into Canada. Distance is not an obstacle to explorers. We fish for our dinner and drink directly from the lakes. It is a time before giardia, acid rain and invasive species, and we follow a rule of leaving no trace.

Along the way we pass an apparition. I hear it before I see it. A sort of steady putt, putt, putt. Then I see a spot of silver with a cloud drifting away from it. We are in a motorless area, but there is no doubt that the canoe coming toward us has an outboard. We slow our approach to have a conversation with an old man. When asked, he says the outboard motor is a homemade steam engine. The rangers have approved it. He says it just uses what nature provides, a little wood and water and leaves no pollution. He tells us he built it because he can’t paddle as long as he used to. We say goodbye as he stokes his boiler with a few twigs and putters off down the lake.

As the stars come out, we try to fix our knowledge of the world. Caught between adolescence and manhood, we try counting stars before giving up at 200 in only a small fraction of the vault above us. We watch a silver object the size of Venus slowly cross the sky. When it makes a right angle turn toward the horizon we both turn and ask, did you see that? 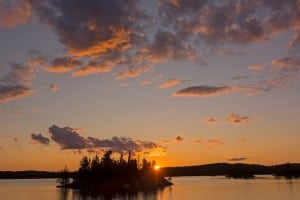 We know that belief doesn’t need facts or science, but I argue that it is a refraction by the atmosphere of a then rare satellite. Jimmy thinks it might be an alien ship. We test the laws of reason and agree that it was a satellite, but we both admit that it would be cool if it were a UFO.

Looking at the stars makes one feel small. Some say that looking up proves that there must be a God. But proof and facts are one thing, and belief is another. The operative words are ‘prove’ and ‘must.’ But it seems to us that science, and belief can coexist. Proof is not needed for belief. Belief is personal and internal. Science is based on facts. Proof forms truth. Those truths form an external agreement between us.

In between is wonder, the awe of the unexplained universe. It doesn’t always need explanation, though as humans, we are compelled to ask. One only has to look at the stars.

The universe is big. Here we are on an island, in a lake, on a small planet. The air above us is perilously thin. Maybe five miles thin where life can live. Like a coat of shellac on a basketball. Yet it protects us from the cold darkness of space and keeps the earth at just the right temperature for life. We live in a delicate balance. Every one thing connected to another.

Now we are losing that critical balance. We use our air and water as sewers. In our arrogance, we believe we can simply go on with unlimited growth exploiting fossil fuels. The level of carbon in our air is now higher than it’s been in 15 million years. This is fact, not belief.

I look up at the stars. If there is a god, he has plenty of options.

This is our home. It is a gift. The distances to the stars will keep us grounded here. There is no place to go if we use this planet up. Like the old man on the lake, maybe it’s better to live in balance and use our creativity. Together we can and must solve the imbalance. Or we may leave no trace.