The Election and November Raspberries

The Election and November Raspberries 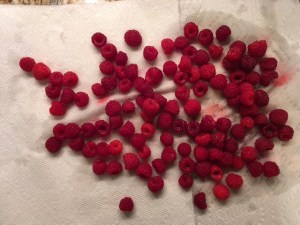 It’s a sunny day. I woke up to two significant events. The first is president elect Donald Trump. The second is my raspberry patch.

I have late bearing raspberries and they are a source of pleasure for me. I feel like I am getting something directly from nature when they bear fruit. Something primal. It must be how a farmer feels when they bring in their crops. Or how the pilgrims felt at Thanksgiving.

This year I set a record. I always mark the very last raspberry of the season. In past years that date has been in October. Last year it was November 4th. This year, it looks to be November 10th or maybe mid-November. Scientists tell us that we are experiencing consecutive record years of hotter months, but we don’t seem to pay much attention to it. I am seeing this trend in my raspberry patch.

Living in Minnesota, I suppose people welcome warmer winters. I remember when my own children were small and we went trick or treating in the Halloween blizzard. This year, there was no snow for the deer hunters. The climate is changing, and while the small changes don’t seem like much, they are already beginning to affect the corn and crop yields in the state.

The other change is our new president. He doesn’t seem to believe in climate change and is likely to actually create harm to the environment if we take him at his word. That’s, at best, a major disappointment and at worst, a disaster for the USA and the world. The world will move on without us, and nature will be brutal in her disregard for our petty politics.

I’ve been thinking most of the night about how this affects my coming out as an environmentalist, and what it means for the rest of us who care about the earth. What should we do?

The first thing is to hug your children and grandchildren. They tend to be sponges and take on more of the world’s worries than they need to. They mirror us in our anxieties. My grandson called me at 6 AM, (he lives in Georgia) to announce that Trump was president. He is eight years old. I told him that everything would be OK, and to have a good day in school. I asked him whether his younger brother was up. He is five. He said he was, but that he was packing to move to Canada.

The second thing I would say is “Take a breath.” Presidents don’t really have that much power. They can affect policy, but it takes awhile for that policy to become effective. There are some checks and balances. There is no way to sugar coat this result. It will have ramifications for the environment and social justice. But we all deserve a moment to absorb it and decide what is next. Try not to think of the elephant in the room. Get outside and appreciate the good day.

The third thing I would say is, “Remember your values.” When you take away the passports and borders and licenses and labels we are all just poor humans walking the earth and passing through. We still care for each other. That is fundamental. We still care for the earth. Reactions will range from anger to sadness. Easy on the Xanax. Remember the opposition is not evil. They care about the same things we do. We will help them achieve what we all want with respect to the environment by using our own values and relying on identifying common values. Go ahead and scream at the pillow to which you’ve attached a likeness of the president elect. Just don’t do it in public.

Lastly, I would say, “Review, re-commit, and then re-engage.” While the environment was not an election issue, obviously, the green movement has missed the mark on convincing the electorate of its importance. Around 62% of the voters believe the environment and climate change are important, more Democrats than Republicans. However, changing that into action is missing. The environmental movement needs to do two things. First move this number upward toward 80%. The second is to turn this belief into action. This isn’t easy. But set yourself a goal of changing one person’s world-view, and do it gently.

My advice on this is to speak firmly, without yelling, about what it important and what people can do. For example, in my conversations with Iowans on the Dakota Access Pipeline, my conversation starts with questions on how the climate change is affecting corn yields. For every day above 84°F the corn yield drops by 0.7%. Over the next ten years, that will impact the Iowa corn yield to the tune of $2.2 Billion. That’s a lot of jobs lost. How will we deal with the 1.2 megatons of CO2 that the pipeline will dump into the atmosphere every week? Could we offset some of this with wind and solar? Iowa could lead with new jobs in this area. Can they support new jobs? You know the drill.

Recommitment is required because it isn’t that the views of the president elect are right, though he won the election. Its because the opposition was weak. That weakness is a result of apathy. We can let events unfold or we can shape them and that is our choice. As others have said, Democracy isn’t guaranteed. We lose it when we don’t act.

With the new president, a large part of this recommitment will need to be local and state focused. While national policies are in jeopardy, we have made progress in these areas and can continue to do so.

No magic answers. Just a imperative uphill struggle. But the raspberries are really good. And I look forward to visiting my five-year old grandson in Canada when an army of armadillos comes swarming up from the south.