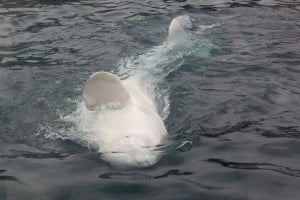 Once, when distance meant time, I traveled by train from Winnipeg to Churchill on Hudson Bay. It was a two-day trip though endless taiga forests comforting in their vastness. I spent time meditating on how small and insignificant we humans are in relation to the world.

Churchill was a one bar town back then. A departure point for the more remote arctic. It was once part of the Hudson Bay company’s empire, and Fort Prince of Wales was built across the mouth of the Churchill in the 1700’s to protect the fur trade.

I found a native Cree who could help me canoe across the large inlet to the now deserted fort. The next day we set out early with a mind for the tides. About half way across we were greeted by a pod of Beluga whales. They surrounded us and dove beneath the canoe. Twelve feet long and white, these strange creatures made me nervous swimming just a couple feet under the canoe. Any capsize might have resulted in hypothermia and death. But they appeared just as curious about us as I was of them. Their heads were domed, their faces frozen in a smile. There was intelligence there as well, and one of them turned its head and looked at me as it passed under us. One cannot help being awed by something so wild and so close.

Later that night, in the Quonset hut bar, I met a man from Texas. I asked him why he’d come to Churchill. He said he was there to kill a Beluga. He’d managed to get access to a permit issued to a native in order to hunt.

When I asked him why on earth he wanted to kill a Beluga whale, he said, “I want to kill one… before they are all gone.” This statement still seems absurd to me. Part of me hoped he’d wind up in the water, a Texas Ishmael.

There are still Beluga in the mouth of the Churchill every summer. They are listed as “near threatened” on the World Wild Life list. Around the world, their numbers are declining like many species. In the US there are 1604 species on the endangered or threatened list. Most of these are on the list for anthropomorphic reasons. Either human caused habitat loss, or human induced climate change. While extinction is part of a natural process, we are now losing species at a rate of 1000 time more than the background rate. Some say the number may be 10,000 times. Every day 150 species go extinct. There have been five mass extinction events in the history of earth. Scientists say we are now creating the sixth.

Should we care about insects that go extinct? Or just cuddly Panda bears, or more locally, polar bears? The problem is… nature teaches us that we are all connected. Lose enough species, and the laws of unintended consequence create collapse of the whole life system. Human’s included. Bee colonies are now collapsing. We rely on them to pollinate about one third of our food supply. So yes, we should probably also be concerned about insects. Like the hunter, no one will miss a species until it is too late. Yet why is it that if something happens out of sight, we believe it really doesn’t happen? Perhaps humans are an evolutionary dead end?

We have brought species back from extinction. The Bald Eagle for instance. The Condor. The wolf in the lower forty eight.

Yet the world is not as vast as I once imagined. We humans are both more significant and less significant. Nature really doesn’t care what we do. It simply responds.

I am glad there are still Belugas. We need them. The world would be less joyful if we lose them. That day on the Churchill was a good day. It still is.

It’s not too late. We can still impact the rate of loss. More than that, we might want to avoid what happened to the crew of the Piquod.