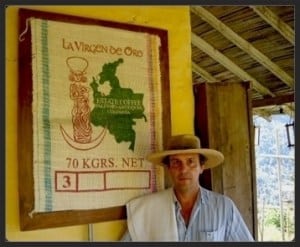 We are three hours south of Medellin, Colombia crossing the Cauca River and heading into the mountains. The Cauca is muddy and roiling from the rains and licks the bottom of the one lane bridge.

Another hour and one muffler later, we are still struggling up a two track into the jungle when we come to a small hacienda with several horses tied outside. My son-in-law says this is where we start to walk. Our destination is La Virgen de Oro coffee plantation run by Jorge Mario Correa three or four miles further up the mountains at an altitude of 5600 feet. We are in search of the “god’s cup.”

Virgen de Oro is a 50-hectare coffee plantation sitting in the shade of the Cordilera Central range. We start to hike when an old Ford truck appears, something out of The Grapes of Wrath. We are saved the hike and after a bone jarring ride we arrive at the finca.

Looking up at the volcanic ridge above the farm, I am reminded of Conan Doyle’s Lost World and expect to see pterodactyls gliding off the razor sharp ridges. Jorge Mario gives us a tour of the plantation which is mostly planted with Arabica and shaded by both the mountains and Nogal, Cedro and native species. We don machitas, knee-high rubber boots, and hike out into the mountains. Jorge Mario explains that we are in a bird sanctuary and that there are over 1800 species of birds that have been identified here.

After the tour we sit outside on a veranda and he serves us coffee. I admit to not being a coffee aficionado, but after this cup expect I could become one. I ask him about his love for coffee, his struggles to get export licenses, and his plans for the future. One question I ask him has a disturbing answer. “Have you noticed any changes in your growing season?”

He hesitates looking out across the Cauca valley and then says, “There is only one person that doesn’t know what’s happening… and he is in Washington DC.” This is in the term of George W. Bush. Jorge Mario goes on to say that he is worried that the seasons are changing. It is getting warmer. The change is affecting his yields. He points upward at the wall of volcanic rock. “No where to go higher.”

Recently, I am reading the The Impact of Climate Change on Coffee Production in Colombia and Ethiopia by Joel Iscaro.

“After oil, coffee is the most internationally traded commodity in the world; consumers from all around purchase and enjoy coffee on a regular basis. The economies of many countries depend upon coffee production for stability and growth. New studies have found that Coffea arabica— the plant that almost all coffee is made from—may go extinct by the year 2080. Climate change already has (and will continue to have) a severe and negative effect on coffee production throughout the world.”

This trend is due to four things. First increasing global temperatures. Coffee has evolved to grow in an optimal temperature range. The second is increased pests, Berry Borers. These insects, which are tolerant of caffeine and feed on the berries, increases exponentially with temperature. The third is disease (Leaf Rust) which is also aided by changing temperatures. The fourth is increased rainfall in Colombia caused by increased ocean temperatures and the ability of a warmer atmosphere to carry more moisture.

Colombian coffee exports were $2.6 Billion in 2014 and while they have actually grown in recent years, many small farmers depend on it as a cash crop. The trouble with climate change is it’s insidiously slow. It’s easy to ignore the warning signs. Like cancer it takes a while to develop but then grows at an accelerating rate, mercilessly killing its host.

It’s been eight years since I visited with Jorge Mario. He was recently in Georgia at a coffee exposition and he is still doing well. But he worries.

I tell his story here because I wonder how a small rural farmer from the jungles of Colombia sees what is happening when our leaders have their heads in the sand? For now, enjoy that cup of coffee. With the right actions we may yet save the Coffea Aribaca.