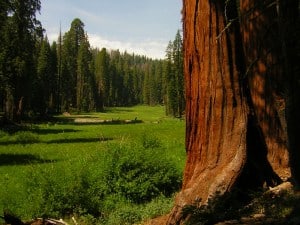 It’s early morning in Crescent Meadow. Dew sits on the grass. While other hikers are still asleep in their tents, I walk silently on the soft earth among the fallen giants. The redwoods here can reach twenty feet in diameter and live to be over 2000 years old. They’ve been on earth for over 240 million years and one can only feel reverence in their presence. The earth and forest are sleeping in a quiet rhythm. If you listen you can hear them breathing.

As a solo hiker, I go at my own speed. I have a destination, but no goal so I can stop when I want. I’m headed up past Bearpaw meadow to Hamilton Lake where Ansel Adams took one of his famous photographs. Perhaps I’ll head over Kaweah Gap at 10,000 feet where the peaks are ragged and there are few footprints.

I’ve done this hike three or four times and I can get lost in it’s comfort. Depending on the season, the river crossings can be at raging, or it can snow if one lingers too long in the fall. I get to Bearpaw before the tourist season and camp on a slap of granite. Looking down the Kern Valley, it’s hazy. It didn’t used to be. The haze comes from the cars to the northwest in San Francisco hundreds of miles away. Lot’s of things are happening to the forests in California. 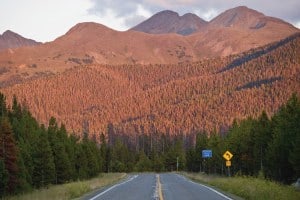 Last year, California lost 62 million trees to drought and bark beetles. The higher temperatures due to global warming cause the beetle populations to explode. In total, foresters estimate the dead trees at 120 million. Its hard to get one’s head around what is happening. A human can’t conceive of a million or a hundred million. We use the word drought, but its been going on for seven years. Rather, it might simply be the final desertification of California. It may never end.

While I walk, I do the calculations in my head. A good Douglas Fir takes up 48 pounds of CO2 per year and can store up to a ton of carbon. A normal car getting 22 mpg and driving 11.5K miles per year creates five tons of CO2. So this means that these dead trees won’t absorb the CO2 this year put out by 555,000 cars. More than that, as they stand dead, they are a risk for forest fires. Burning a tree produces carbon black which is about 1000 times worse than CO2 in creating global warming. The forest is dry here even at elevation. The streams are trickles of their former selves, but aren’t we all. I don’t want to do the calculation, but I know I will. The biomass of a dead 120,000,000 trees is the equivalent of the CO2 produced by 23 million cars in a year. More are dying every year.

I know that facts that don’t fit our world view only reinforce it. That somehow we have politicized nature. Some people will reject this. But nature doesn’t care about us. Some say God wouldn’t let anything bad happen to us. But I’ve seen the dead trees.

Some say it’s God’s will. But to quote Katherine Hayhoe, “If you believe that God created the world, and basically gave it to humans as this incredible gift to live on, then why would you treat it like garbage? Treating the world like garbage says a lot about how you think about the person who you believe created the Earth.”

This doesn’t have to be a soliloquy for the forests. We can change before it’s too late. But each of us needs to act together. Together we can all do the things to restore the earth. Californians realize this and are leading the nation in everything from fuels standards, to electric cars, to renewable energy. They see what’s happening. They are smart, courageous, hard working and creative. In the process they are creating tens of thousands of new jobs. Or we can do nothing.

As night falls, I lie bag in my sleeping bag and stare up at the sidereal vault. It’s been a good day. I can reach up and touch the stars. I say a small prayer. Let’s restore the forests.