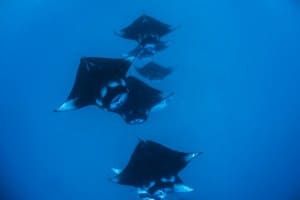 I love the ocean. I grew up on the prairie and in the woods, but the ocean calls to me.

I’ve tried to share with my children, the beauty and wonder of the world as I’ve experienced it. So my daughter Katie and I hire a couple of kids in Belize to take us out to a reef in a little open boat. It’s late afternoon and the trades are blowing, creating a little chop. The sky is dotted with clouds, the air warm, tinted with the smell of salt and iodine. We put on our fins and snorkel gear and go over the side. The local boys join us, bringing along a spear gun.

We are fascinated by the iridescent tropical fish in yellow, green, and blue. Floating above them, it feels like we are part of something wild and very ancient. Then a squadron of a dozen large rays wing their way under us. Graceful and silent, these animals are from another world entire.

We watch the boys try to chase a grouper. They wind up spearing a couple of smaller fish. We are not in a reserve, and fishing is a means of sustenance for them. Then one of the boys hands me a spear with the two fish on it and says hold them. He proceeds to the boat and roars off.

Hmmm? This doesn’t seem good. We are half a mile from shore which suddenly looks like three miles, and the fish seem like bait, dripping a few drops of blood into the water. Always aware that we are not the top of the food chain in the ocean, I look around and try to keep them out of the water with one hand while treading above the coral with the other.

According to a new report released by the IUCN (International Union for Conservation of Nature) scientists have data that confirms the 60% of the Caribbean coral cover that existed in the 1970s has crashed to less than 10%. This is a result of a combination of global warming and overfishing. The global warming impact is a double whammy. First the oceans are absorbing 30 to 40% of the gigatons of CO2 we are pumping into the atmosphere. To reach chemical equilibrium some of it reacts with water to form carbonic acid. Over the last century or so, the oceans have increased in acidity by almost 35%. This acidity is also why your dentist tells you that carbonated water (insert Perrier or Pelligrino) isn’t good for your teeth. The acid over time can etch them.

The second whammy is the warming ocean temperatures. The oceans act as a heat sink absorbing a large part of the heat from global warming. Species on earth have evolved over eons to live in a particular temperature range, especially the coral. They can’t adapt to rapid changes. We didn’t get here overnight. We are facing the most rapid warming period in 750,000 years.

The combination of ocean acidification and warming causes coral bleaching. The micro-organisms which live in the coral leave, and the reefs die. Today the great barrier reef off Australia, which can be seen from space, is dying due to coral bleaching. 81% of the northern third is now dead. About a third of the middle of it is bleached. The lower third is starting the process.

Tourism and fishing based on the reefs in the Caribbean account for about $3 billion annually. The reefs also provide protection from storms. Sometimes stories about reefs are filled with doom and gloom, but there is some good news. Conservation and protection are helping some reefs. Giving us time to make changes. But we need to change fast. The damage to reef systems has happened in the last twenty to thirty years. This may seem slow, but it is incredibly fast in terms of nature. The oceans are vast, but no longer infinite. And if the oceans die, it’s likely game over for humankind.

The boy returns with the boat after ten minutes. I am relieved to see him. He went to see a friend. The time he was gone seemed like days. The same accelerated time affect that we are seeing in coral bleaching. I hand him his fish.

As we continue swimming, I point out a shadow to my daughter. It’s a seven-foot black tipped reef shark swimming over the ocean side of the coral into the deep blue. Like the salt in our blood, we are part of the ocean. The world is wondrous and beautiful. I hope to show my grandchildren this same reef someday. For now, it’s been a good day.