The Business of Species Eradication

The Business of Species Eradication 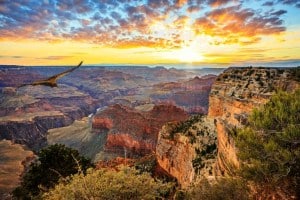 Are we above God? Sunrise on the south rim of the Grand Canyon, light reflecting in pinks and rust, purple clouds slanted to the west. My daughter and I are cold as we start down the South Kaibab Trail. But something stops us.

Looking out across the canyon, our eyes catch motion slightly above the rim. Something is coming toward us. Slowly the image forms, getting larger without apparent motion. Then three California Condors emerge and glide quietly over our heads slipping down over the next ridge. With their ten-foot wingspans, the birds are immense and breathtaking. We do not break their silence. We are privileged in their gift.

On the other side of the country, our Senators are getting set to “modernize” the Endangered Species Act. This act has saved species such as the Condor, the Gray Whale, Whooping Cranes, Wolves, Grizzly Bears, and the Bald Eagle among many. Established by the Nixon administration, the US became the first nation on earth to declare a basic right of existence for species other than our own. Its mission is simple: keep species from going extinct at all costs.

It appears that these endangered species are now standing in the way of progress and jobs, according to proponents of modernization. They say the Act hinders land management, cattle grazing and oil development. “Modernizing” the Act would return control, in many cases, to states and local property owners. Proponents claim that the Act has only saved 50 of the 1,600 species on the list, and deem it to be ineffective.

We are now losing species on earth at a rate of 100 to 1,000 times the natural background rate. Much of this is due to loss of habitat, overuse and climate change. Scientists are telling us that this is the beginning of the sixth mass extinction on Earth.

The risks don’t seem so big if we wipe out the Appalachian monkeyface mussel, for example. Since Trump has repealed the Streams Protection Act, we’re going to allow coal mines to dump tailings into streams again. The heavy metals and leached minerals change the salinity of the water and poison it downstream. But no one’s going to miss the monkeyface, right?

The problem gets a little more complicated when we’re talking about bees. Our use of Neonicotinoid pesticides contributes to bee colony collapse. Last year, US beekeepers lost 44% of their bees due to colony collapse. The problem for us humans is that bee pollination accounts for about one-third of our food production. Now, who is at risk?

At the core of the argument over species is a set of values. Which is more important? Individual rights and the rights of corporations, or the rights of the collective? There is a strong ethic among conservative voters for individual and property rights. The problem occurs when these rights conflict with the rights of all of us. The collective rights are in the commons which is a principle of law dating back a thousand years. Essentially it means, in ranching terms, you can’t crap where others drink. While you own the land, you also have obligations to preserve resources that are shared. For example, the water downstream or the air.

Putting control into the hands of those who stand the most to gain is not always a wise decision. As humans, we are very short sighted. Our appetites don’t lend themselves to long term survival. We tend to kill most of the buffalo for sport and when they dwindle, go on to kill all the passenger pigeons. Most animals don’t do this. But are we smart enough to figure out which species should live or die? This is the reason we have regulations.

Ogden Nash said, “God in his wisdom made the fly, then forgot to tell us why.”

I’m not smart enough to tell you which species should live or die. That’s a decision for someone with a higher pay grade than our senators and president. However, I can tell you that if we don’t restore the earth, humans will become the endangered species. It’s time to d look at the earth from a higher perspective.