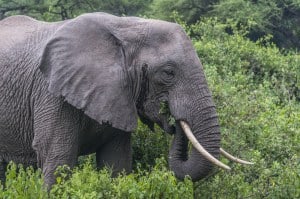 I am camped on the side of mountain near Lake Manyara. The jungle is close around me. Suddenly, the birds stop singing. A dinner of pasta boils on my camp stove. A branch cracks.

My subconscious registers the silence first, then the branch. I turn and there is a bull elephant emerging from the jungle, just fifteen yards away. There is no time to react or even think. I simply stare.

The bull returns my look with old eyes. Assessing no threat, he gently ambles across a path and disappears into the jungle up the mountain. I listen, but the jungle is still silent. He makes no other sound. The crack of the branch was his announcement. I have been in the presence of another spirit. My heartbeat returns to normal.

In the days that follow, I time travel back into the late 1800s when this country was first being explored by white men. I will always remember coming across an unusually large herd of elephants… almost fifty. I sat and watched them for an hour.

Several days later, I am walking the back streets of Mombasa and come across a government warehouse. The sign on the door says, “Ivory Storage”. There is a guard in a military uniform at the door. I ask him if I can go in. Being a white man in a recently colonial country still has its privileges or perhaps he simply didn’t care. He lets me inside.

As my eyes adjust from the harsh light outside I see what I don’t want to remember. The warehouse is filled with thousands of ivory tusks stacked waist deep and stretching into a darkness I can not penetrate. Stunned, I look at the blood-stained ends of the tusks, each labeled with some code, perhaps weight. One pair in particular was only two feet long: the tusks of a calf.

There is no amount of rage or despair that can bring animals back from death. These tusks were bound for China to become ornaments and carvings. Despite the pretense that they had been seized from poachers and were supposed to be burned they were reduced to capital.

My mind immediately went to the herd I’d seen days before. To the courteous bull on the side of a mountain. What are we doing, I wonder?

I tried seeking answers with the ministry of wildlife, Richard Leaky, and the WWF. They all gave similar answers. They were trying. Corruption was rampant. There was this or that program. Some programs have even helped over the years since.

What I remember is what I want to forget. That somehow, modern man believes he has dominion over the earth and its creatures. But that is sheer arrogance. Combine this with our ignorance and greed, and it seems we are now in danger ourselves. We have reduced everything down to some capitalistic equation. We have forgotten our connection to fellow humans and others creatures that share this earth. I see this when our president wants to build more pipelines or to burn more coal in order to bring back Zombie jobs. When I hear him or his cabinet members talk, I realize that despite what they believe, and even their best intentions, they have lost touch with the earth (and their own souls).

What is one to do? When you wake up in the morning and are faced with extinction, metaphoric or real, you do the only thing you can. You forget that it may be too late and you go out and do the things that you believe. The right things. And you do this everyday. Until you can no longer remember. Because it is the moral thing to do. It is the currency of value for your time on this earth.