I am in Donley County, Texas. The panhandle. As sparse as the spelling of its name. Flat, dry to the edge of the earth, and bucking a headwind. But something’s going on here.

My eye catches a white wind turbine, then another and another. As I look, dozens fade off into the distance. I pull off the interstate and turn onto a two-lane tarmac. They don’t look that far away, but I am realizing that I’m not getting much closer because they are immense.

A turn onto a dirt road and two jackrabbits later, I am 100 yards away from a huge rotating wind turbine. Out of my car, all I hear is a meadowlark. White clouds race across the plains and the blue of the sky hurts my eyes.

There I run into Jake and Garcia, two turbine techs that have just brought the wind turbine on line. I introduce myself, play the “dumb Swedish Yankee” card, and begin asking them questions.

My first question is, “how many are there?” Jake is from Florida, about 30 years old, and sports a long red curly beard. He says there are six wind farms in the area with about 100 turbines in each farm. 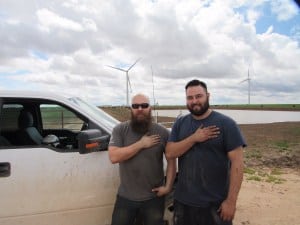 How tall are they? Garcia looks up, he’s from Midland Texas, a refugee from oil’s boom and bust. They go from about 262 feet to 328 feet at the tallest. Longer than a football field. A one megawatt turbine generates enough energy to supply about 350 homes annually.

Is it good work? Jake says it’s the best job he’s ever had. He started at $22/hour but has been bumped up from there and gets a per diem worth about $24,000 a year. He lives out of a camper he tows behind his truck. He says, “If you know of anyone who’s smart, mechanical, and works hard, we could use the help.”

How long does it take to put one up? A good crane crew can install two a day when the base is set.

I thank them and we part. I sit there for a minute watching the blades rotate around and around. The wind seems a steady 12 to 15 knots. They told me a lot of things about wind turbines and the numbers start to roll in my head. Mostly, I look at all the land that doesn’t have turbines on it. Later I do a little research. 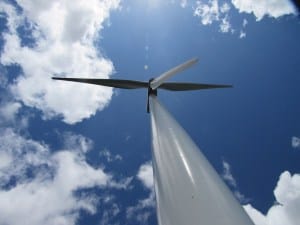 Turbines are white because they are painted with a UV reflecting paint so birds can see them. They have no perching surfaces, and all the wires are underground. All of this helps with bird collisions.

But more than that, I read that one turbine displaces 1,600 tons of CO2 annually. To note, t would take 900,000 trees to absorb that much CO2. Texas has 40 wind turbine projects, either erected or in progress, and currently supplies 20,321 megawatts of electricity with 5,500 turbines. To compare, a typical coal plant provides approximately 600 megawatts. We have begun replacing a lot of coal plants, now that wind is cheaper than coal for electricity generation. Cielo Wind Power did a calculation that said Texas and the Dakotas could supply all the electricity needs of the country. With more turbines.

We are making progress on the transition to clean renewable energy. But we need a lot more. We need to help our legislators navigate the BS handed to them by the fossil fuel industries. It’s a short walk from coal to wind. The Zombie jobs of the coal industry are not coming back. This is our task. But for now, I am excited, and this has been a good day.

As I am leaning against my car the local rancher drives up. He says, “Can I help you?” I explain I was just looking at his turbines. He smiles, “My new cash crop.”