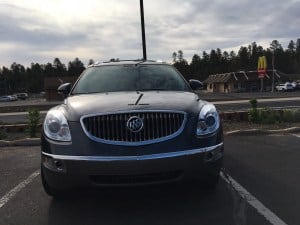 Let’s call him Art (not his real name). Art drives a Buick Enclave, I would have guessed a Ford F150. He’s from a small town in southern Illinois, population 3,000. Art’s driving cross-country with his wife. We are trapped in a laundromat watching clothes tumble. He’s drinking a beer, which he opened on the door jam.

On my journey, I’ve decided to have conversations with anybody, including those from “flyover country.” His words, not mine. I’ve talked to wind turbine workers, a fracking foreman, Native Americans, and all sorts of people on the trail. In my conversations, I am aware that we all have the tendency to look down on people that disagree with us.

Do I have an agenda? Hmmm… Yes. I am wondering how the environmental movement got so out of touch with the citizens of America.

Art and I do the usual dance of “where are you from?” Looking for common ground, we chase the subjects of farming, GMO crops, coal, squirrel hunting, car mileage, machine guns, lead shot, and ethanol. The conversation rambles. Searching for common ground.

A couple of things stand out. Art first tells me, “Don’t know what your politics are, but I ain’t talking politics.” It strikes me as sad that we’ve reached this point. The other side is the enemy. I try a bridge. “Why man? Aren’t we both Americans? We generally want the same things. If we can’t talk a little politics, then who can?”

I learn he purchased his parents small farm on which he grew up. 160 acres. He says he bought it for nostalgia, but quickly adds that land is an investment in his area. He then tells me, he’s sold the mineral rights under the land to a coal company. I ask him whether he thinks Trump’s attempt to bring back coal will work? He shakes his head “no” while giving a grimace. He says that we can’t turn off coal overnight, but he doubts its coming back. This from a Trump voter who sold his mineral rights to a coal company.

I turn the subject toward wind energy. We both drove across US 40 and saw the north Texas wind farms. I tell him I interviewed a couple of wind techs. Art’s a retired machinist and likes mechanical things. He’d like to see one, understand how they work. I tell him about how wind is cheaper than coal now, and that we’re putting up a new turbine every 2 ½ hours in the US.

At another point in the conversation we talk about his car and mileage. He gets about 30 mpg. I respond that I got 44 mpg on the way out in my Prius. I don’t tell him I bought carbon offsets. He rebuilds old British motorcycles. I ask him – Triumphs, Nortons, Enfields? Yes, he says. We discuss the way ethanol rots all the old rubber gaskets. Then we talk about ethanol in gasoline. He says, “You know they use ethanol ‘cause they had to take out the lead. It was poisonin’ the kids.”

Next we discuss GMO corn and ethanol. How does he feel about GMO? The same grimace comes back. He’s definitely not for it. Doesn’t like the idea of paying one chemical company for seed. But says the yields are higher. He says there’s not enough land to grow enough corn to power America. I try to move him a little, with the argument that it takes more energy than you get back from ethanol when you consider fertilizer, planting, harvesting, drying and distilling. He says they still use the mash for feed. I ask him if the animals get drunk? Then I say we should save the oil for farmers and have everyone else go electric.

Art is a self-proclaimed gun nut, so we talk about guns. I used to hunt pheasants as a kid so I ask him if they have pheasants in his neck of the woods. He says, no. Turkeys and deer. He takes a few. Dresses the deer himself. He talks about taking one of his seven grandkids to a machine gun rally. A place where the guys must be rich. Because they shoot thousands of rounds of ammo. A fifty caliber is a dollar per shot. He describes an old guy with with four fifties mounted on a turret. The guy was firing at a bus loaded with gasoline. He fired tracers and the the whole thing went up. Said he had a shit-eating grin on his face. Everyone congratulated him. Shook his hand.

I asked him about Trump bringing back lead ammunition. Whether that was a good idea? He thought it was OK. I asked him if he’d seen a Grand Canyon Condor yet. Told him how lead bullets poison them because they are scavengers. He said, he’d eaten some lead in quail and squirrels and it hadn’t hurt him. I asked him how much he weighed? He was taken back. (I can be a jerk.) He says, about 230 lbs. I asked him if lead was bad for kids, how much lead would a 20 lb bird have to eat before damage occurred? He said, we don’t need lead bullets. There are other options.

In the end, I enjoyed our conversation. There is no stereotypical Trump voter. He voted for Trump, but is cautious on coal, and interested in wind. We each hold our own cognitive dissonances. He, his lead bullets and lead gasoline. Me, my carbon offsets and driving across country. We didn’t change each other’s minds. All anyone wants is to be listened to. They don’t like to be told.

I ask him finally, how he thinks Trump will do? He says he doesn’t know, but he didn’t like the last “regime.” This last word rings a little. I say, regime? Do you watch Fox News. He says, pretty much exclusively.

I can’t resist the last word. If you don’t think you should get seed corn from one company, why would you listen to just one news station? We shake hands understanding that we are different people. But we’ve had a conversation. We need more conversations.