Lost in the Desert

Lost in the Desert 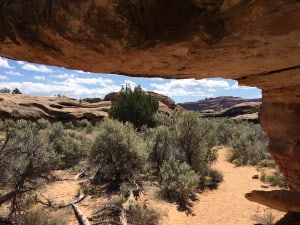 South of Island in the Sky, north of the Needles and west of the Maze. The canyon lands of the west are desert. I spend the morning wandering around a slickrock butte finding handprints on the walls under shady overhangs. People lived here.

First nomadic hunter-gatherers from 10,000 years ago to 500 BC, then the ancestral Puebloans and the Fremont known as the Anasazi. They left around 1300. Moved south, perhaps as a result of a long drought. The country still has the ruins of their ancient circular granaries. Finally, over time, the Utes, Navajos and Paiutes moved through and some still live here.

The desert is a harsh environment for humans. These people somehow scratched out a life. They were tough. Some were more successful, due to the levels of rain or runoff in the valleys. 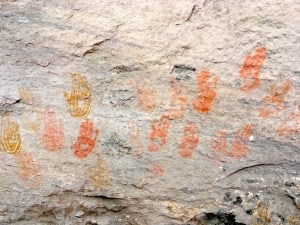 They say that water can kill you in the desert. Too much and you drown in canyon flash floods, too little and you die of thirst. The whole cycle of life is tied to water. We take this for granted in our cities. Just turn on the tap. Now the whole Colorado River turns to dust in its former delta above the Sea of Cortez, its water siphoned off for twenty million in LA, San Diego and Las Vegas. Doesn’t even reach the sea. If the snows don’t come, if the climate changes, we may indeed follow the Anasazi or drown in our own thirst. Nothing is permanent. No guarantees. We forget this.

I am hiking in the afternoon. Clouds drift across the earth forty miles to the east and drag tentacles of rain across the cordillera of the La Sal. Early Spanish explorers couldn’t believe there was snow on these desert peaks. They thought the tops of the mountains were covered with white salt. The Utes had a better name; Tukuhnikivatz, the place where the last sun sets.

It’s spring now. The desert is in bloom, but by late in the day the heat builds. I’ve gotten better at finding water. Spotting little patches of green where seeps run out of the rock from rains years ago. I am by myself, and decide to follow a desert bighorn path down off a trail into a small bowl. In the mountains I would call it a cirque. But there have never been glaciers in this place. I walk carefully so as not to disturb the cryptobiotic soil which looks like dried granola.

The earth is living here. A crust covers everything. It’s made up of lichens, moss, and cyanobacteria, similar to the life-giving phytoplankton of our oceans. Together they keep the soil in place, fix nitrogen and hold moisture. The desert is alive. Flowers cling to the soil. The pinions provide nourishment for the birds and small animals. Each living thing has a niche and is tough as hell. As the afternoon wind builds, I thank the little cryptobiotics that keep the world from blowing away and the dust out of my eyes.

I drop down another arroyo toward the Colorado. Everything in this country runs downhill. As I am walking over a piece of slickrock, I notice that I can’t see across this fractal valley. My vision is going. I am getting a migraine. This is a land of contrasting light. You can see it in the art work of the Southwest. And this contrast has set off some reaction in my brain.

I pick a spot in the shade of a pinion and lay down on the rock, placing my shirt over my eyes to create a darkness that allows me to watch the fireworks in my brain. I breathe slowly and let my body adjust to the rock. After a while, I can feel the earth holding me up to the sky. There is no gravity.

I am mildly concerned. While the migraine will pass, it reminds me that hiking alone is not always a great idea, especially off trail.

I listen to the wind in the pinion. I hear the buzz of a black carpenter bee looking for a cactus bloom. I feel an ant crawl over my arm. I flick it away. The sun warms my left boot. A raven croak echoes back from the rock as I envision a tossed black rag against the cut sky. These sensations are a comfort. From someplace in time, I get the feeling that I am part of the earth, from the earth, and returning to the earth. Everything in perfect balance, each life designed by the world to be reduced into amino acids. I don’t believe in reincarnation, but my body will cycle back to earth, maybe as a yucca or a meal for a coyote. Even the cryptobiotic soil will be served. Somehow this is a peaceful feeling, knowing that the molecules of my body will move across the face of the earth as they have from the ashes of supernovas. Everything is connected.

I wake up to the call of a small desert wren. The sun has lowered. A hand above the horizon. I am stiff and old and move like the rock. My head is fuzzy and I look upward toward the rim from which I have descended. Was it two or three cuts that I walked past? I am lost. I wait for a small thread of fear in my body.

As I walk in the shadows, the land all looks alike. I remember the Anasazi. They were lost too. Now they are most likely adapted, living in Mexico or perhaps Los Angeles, still drinking the waters of the Colorado. We are a resilient species. As individuals we are weak like my friend the ant. We get lost. Nature flicks us off. But together, we can also find a path. Restore the earth. It’s our choice.

I take the second arroyo.