I climb the starboard ratlins and ease out onto the yard to unfurl the mains’l. My feet swing back and forth on a single footline. Working with my hands free, I am balanced on my stomach over the yard, making me wish I had a prehensile tail. The sail fills quickly. A high pressure front is moving through and we are in for a sleigh ride, a dead run to Isle Royale. I know it’s going to be tough when we try to bring the sail in later. The breeze is gentle now, but the waves are sure to build.

I climb higher into the rigging, up into the tops’l spreaders, and sit. I like it up here. The deck seems a hundred feet below. But it’s quiet with only the wind, cold blue water and anticipation ahead. From the deck one can see nine miles to the horizon on a clear day. The tops’l spreaders allow a view of the curvature of the earth. I imagine what it must have been like for early explorers sailing west into the Atlantic. The ship is small at fifty feet on the water and sixty-five feet overall. The water seems immense. It’s hard not to have reverence for nature in a small vessel. 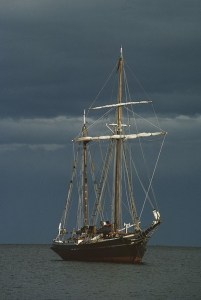 The wind builds. By early afternoon we are in it. Twenty-five knots and a mounting fetch. The crew of eight is all sick, but the ship is fine. There’s an old saying that the ship will endure more than the crew. At the helm, I surf her down the backside of fifteen foot waves, the vessel exceeding her hull speed. While there is joy in being in the elements, I have no illusions. One broken piece of tackle, one careless grasp at a handrail and nature will show us how she doesn’t care. We are all just passing through this time and place.

In late afternoon, I don my oilskins on.  At the wheel again, I turn to look at the lowering sun through a green wave breaking over the cockpit. For a second I am held by the light. Then the wave breaks white, filling the cockpit with cold water before draining out the scuppers.

At dusk, I site a few stars and put them in the rigging to maintain course. After another hour the the Washington Harbor light appears on the west end of Isle Royale. A welcome sight, we are dead on. I hand the helm over and go back aloft with my first mate to furl the main. In the dark, every step up the ratlins requires a force of will. The ship heaves in the swells. I imagine it’s a little like trying to thread a needle while sitting on a wild bull. But we succeed. Then the hook is dropped for the night in calm water. It’s been a good day.

The ship is the Sheila Yeates, a gaff-rigged ketch built in Lunenburg, Nova Scotia. From it, I will sail the next day to one of the world’s most interesting sounding place, The Amygdaloids, a series of small islands on the north side of the Isle Royale archipelago. This ship will carry me many places, though I don’t know it then.

I will sail the Atlantic, and watch a wright whale surface next to us and look me in the eye. I will watch phosphorescent streamers of startled sleeping fish scatter out from the bow like fireworks on St Georges bay. I will sail back into time in the fog of Gaspe to see only the masts of a dozen tall ships in the harbor. Godhavn, now Qeqertarsuaq, on the west Greenland coast will be a port of call.

There the ship will encounter icebergs calving off Lyngemark Glacier directly into Disko Bay. That was almost thirty years ago. When I spoke to another sailor who’d been there recently, I asked him if he had trouble with the ice. “What ice?” he replied. Locals say they use to dogsled to Ilulissat on sea ice in the bay until the mid-90s. But it completely disappeared within a decade. Melted and gone from global warming.

I’ve seen the world change with my own eyes in a single lifetime. The world is a precious place. We need to preserve it. Otherwise, what will we say to our children when there is no more ice?