Is it possible for the forest to speak to the clouds and sky when it is thirsty?

This is what I’m thinking, walking up the mountain in the morning. It’s winter. Cold. Gray. Diluted with old snow. Another season in time.

I am pulled by habit and looking for a little respite. Perhaps a new view through bare branches? But it is too cloudy and foggy to see much.

The clouds are formed from droplets, and most droplets need microscopic airborne particles to act as seeds. If a cloud has more seeds and more droplets, then it is brighter. Some of these particles are from natural sources, like algae, or trees, and others like sulfur dioxide are from burning fossil fuels. The ones that come from trees are called terpenes. They form the blue haze that we sometimes see over forests… the Blue Ridge mountains for instance.

So my mind wanders. Everything in nature has a purpose. We know know trees can communicate in primitive fashion through the chemistry of their root systems. So I’m asking myself, why trees emit these particles at all? We think we know everything, or that we are in control, but we understand so little.

The trail is frozen, icy and rough, so I add crampons to my boots. Twenty-five years ago, I would be wearing snow shoes. Now the earth is changing.

When I reach the top there are clouds. I am pelted with sleet and hail. Little round pellets smaller than cookie sprinkles. I look up. Just a few miles above 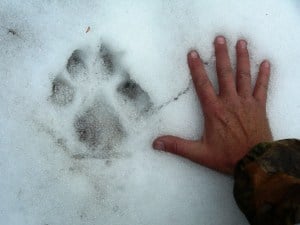 this spot, the air is so thin I cannot breathe. I say a small prayer to the universe and smile at the rotten weather. On the way down, I see an old set of wolf tracks that I missed on the way up while lost in thought.

The wind veers, then dies in the afternoon. Now it’s snowing. Big beautiful flakes and fast. By the time I hit the east side of the Cascade, there are six new inches on the ground.

There is a reason that ‘blanket’ and ‘snow’ are used together. Sound travels miles in the cold, but now the world is quiet, pure and timeless. There are no tracks. One can smell the snow: a faint tincture of ions, moisture, pine and cold. I taste the big flakes. Trying to discern the particles on my tongue. Did the forest ask for snow? I want to believe this. It exhaled, and it began to snow.

A tannin colored river flows beneath frozen sculptures of waterfalls. Light fades in the late afternoon. Monochromatic with black balsam. Though blades of khaki colored grass peek above new snow in the meadow.

Wandering in the snow may not seem normal to most. For me it is a way to disengage with one world and engage with another more ancient. Alone there is some risk, though I am at peace.

My destination is an old cedar high up on the river bank. It has been here since before the country was founded. I say hello, and put my ungloved hand on its crenelated bark, though I am suspect of my nativism views. How have we disconnected so much from the earth?

I ask the cedar for a few bows, then find a small balsam nearby. Its canopy dusts the white ground, but inside, at the base, is an eddy in the snow. I remove a few branches and weave them into walls, push snow against them, then place the cedar to form a bed. A junco stands watch in a neighboring poplar. I imagine she is counting the soft slow fall of flakes.

This is the world that sustains me. All that we depend on lives between the short space of sky above the mountain and my nest beneath the balsam. The air, the breath of the forest, the tiny particles around which form each single snowflake, the moisture for the trees, moss and ferns. It is all connected. I don’t pretend to understand it. But I cherish my own wonder.

I crawl inside. Then into my bivy sack. Time for a short winter’s nap. To dream of the forest’s breath, and the junco counting flakes. It’s been a good day.