Climate and the environment shouldn’t be political issues, but they are. Conservatives are more skeptical, and the current administration, as well as local politicians, are doing immense damage to renewable energy and the climate. As a result, many people are trying to figure out how to move the needle in identity politics around climate.

There are two schools of thought on whether conservatives can be persuaded to act on climate. David Roberts (Vox) says that trying to convert conservatives on climate is a waste of time and energy. He says that we are in a war, and that wars are won by intensity, i.e. more people in the streets. On one side we have the Koch brothers funding media think tanks and legislation to favor fossil fuels. On the other side we have science and the concerns of environmental groups.

I don’t think it’s very productive to try and convince deniers that climate change is real. I do believe that some conservatives may be persuaded, but they are mostly influenced by their media elite (media, politicians, and talking heads). So If you are going to spend time talking to conservatives, recognize that it will take time, skill, and method. Even given that, you might not be successful. Rather, the strategy should be to own climate change and point out the idiocy of the right and make them defend their Luddite position until they say, “We believe in climate change too.”

I have written about how to talk to conservatives about climate. For example, avoid arguing, use values and stories before facts, and be sensitive to your own issues. So if you choose to persuade the Right, there is a method developed by Per Espen Stoknes that avoids some of the pitfalls of fear and fact based arguments of the Left. I will outline it here because I believe it’s effective for those few in the middle and those not yet disposed to act on climate.

He calls his method, ‘The Living Air.’ Essentially, he approaches our atmosphere as a living organism that is very thin but keeps the earth regulated at just the right temperature for life. You can watch his approach on TED talks here. Here are a few key bullet points. 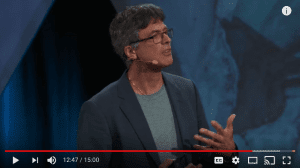 “This air that moves in your nostrils, it is our earth’s skin. It is amazingly thin compared to the diameter of the earth. Our breathable air is only 4 to 6 miles thin, thinner than the skin of an apple compared to the apple. Inside this skin we are all connected.

The breath that you just took, and you, and you, contained around 400,000 argon atoms that Ghandi breathed during his lifetime. Inside this thin fluctuating and unsettled film, all life is nourished, protected and held. It insulates and regulates temperatures in a range that is just right for water and life as we know it. It mediates between the oceans and the black eternity above.

The clouds carry all the billions of tons of water for the soils. The air and rains fill the rivers, stir the waters and water the forests.”

His message is that our air, and therefore the earth, are fragile and need protecting. There is no direct mention of climate change.

I’ve used this approach, and it seems to work well when combined with talks on nature. I add an approach that starts with a photo of earth from Voyager 1 taken 4 billion miles from earth, then one taken from the moon, and finally the Blue Marble image taken by Apollo 17.

I sometimes preface the conclusion with a quote from Carl Sagan‘s Blue Dot, depending on the audience. 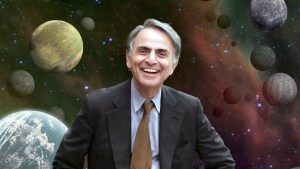 “Look again at that dot. That’s here. That’s home. That’s us. On it everyone you love, everyone you know, everyone you ever heard of, every human being who ever was, lived out their lives. The aggregate of our joy and suffering, thousands of confident religions, ideologies, and economic doctrines, every hunter and forager, every hero and coward, every creator and destroyer of civilization, every king and peasant, every young couple in love, every mother and father, hopeful child, inventor and explorer, every teacher of morals, every corrupt politician, every “superstar,” every “supreme leader,” every saint and sinner in the history of our species lived there — on a mote of dust suspended in a sunbeam.”

The purpose of this quote is to paraphrase “There is no Planet B,” in a more elegant way.

I may also add my own personal belief message as well. “My message is simple. We are part of the earth. While we can see it from above, we are not separate from it. We are connected to it in ways we even can not yet imagine. Things are changing very fast. I believe the the forests, the mountains, the birds, the animals and the air are worth preserving. While many believe God gave man dominion over the earth, I would add that God didn’t ask us to screw it up. I believe we can all thrive and restore the earth, to the garden that it is… if we do it together.”