Chaco Canyon – We Are Coming For You

Chaco Canyon – We Are Coming For You

Pooh Bear is at the top of the stairs. Christopher Robin has him by the foot and Pooh is about to be bounced down the stairs on his head. He wonders if there is a better way to descend the stairs, but by the time his head hits the third stair, he has forgotten this question.

I have a similar feeling after thirteen miles of rough dirt road, then I hit the washboard. My teeth rattle, I ease off and drive the next four miles at eight miles an hour. Going to Chaco Canyon seems like a good idea, but there must be and easier way to get here?

Chaco Culture National Historic Park is described as the closest thing we have on this continent to the ancient pyramids. The land is crenelated, covered in saltbush and dry. The humidity is a minus 20%.

Chaco is the cultural epicenter of the ancient native American peoples in the southwest and is a world heritage site. The area thrived in the period from 800 to 1,100 AD and the sites are thought to be ceremonial or commerce-based. The Chacoans were astronomers, road builders, traders and constructed complex multi-story buildings and kivas. Then they mysteriously closed up shop and moved elsewhere, many believe due to a change in the climate.

I spend the cooler evening, walking among the shadows of the ruins. It’s hard not to imagine First American children running through the sites or the quiet voices of the ancients at the end of the day. I am a time traveler. For me, the idea that others preceded us, or that we too will pass gives me a feeling of the fragility and the temporary nature of life. 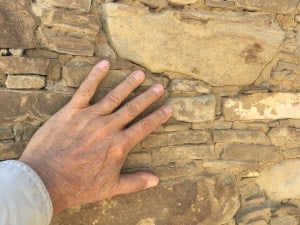 Later, as I sit on the rocks and watch the stars come out, I am struck by another quality of Chaco, the silence. There are no highway noises, leaf blowers, garbage trucks, and police sirens. Like many things, the silence of wild places is something we don’t cherish, because, like Pooh bear, we gradually lose our recognition of it .

Chaco is one of the few places on my journey where I’ve seen Native American rangers. It seems odd to go to Mesa Verde and see only Anglo-Americans as custodians of native ruins. In talking to one of them, she says, “We never really left this place.” Their descendants are the Navajo, the Hopi, and the Zuni.

On the surface, Chaco could be overlooked… a few ruins, dry country and remoteness. But Chaco has another asset that is being coveted; oil and gas. A couple days before, I learn that our leaders have decided that it is OK to drill for oil and gas next to the Great Sand Dunes National Monument. Now it appears that Chaco is also a target. A map from the Bureau of Land Management charts the slow progression of fracking wells towards Chaco.

I am disheartened. When did drilling for oil or mining in national monuments and parks become a thing? At it’s core, it simply seems wrong.

We have better alternatives for energy in wind and solar now. The risks of wastewater and ground water contamination seem high. Then, of course, there is the impact of climate change from methane emissions and the incessant burning of fossil fuels.

It is this last irony that bothers me the most. I walk alone around the great kiva at Casa Rinconada the next evening. I reach down and pick up a flint chard used as a cutting tool. Next to it is a pottery chard. As I turn them over in my hand before returning them, I wonder if we too will disappear as the result of climate change. If each of us does nothing, the likelihood seems high.

Ansel Adams once said, “It is horrifying that we have to fight our own government to save the environment.” There is a better way to descend the stairs. I resolve to continue to look for ways to implement the solutions we have, and also to pay attention to the voices of the ancients. They are telling us we are all connected. 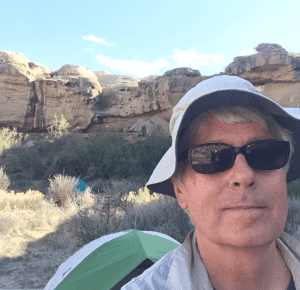 PS: If your want to help in this effort, you can contribute to the Natural Resource Defense Council or Friends of the Earth. Both have a pretty good track record at stopping stupid exploitation of natural resources. On a positive note here is an article on a recent small victory: http://pagosasprings.com/court-saves-chaco-canyon-from-fracking/