Uranium Mining in the Grand Canyon – What Could Go Wrong?

Uranium Mining in the Grand Canyon – What Could Go Wrong?

I am camped on the Colorado outside of Moab, Utah. The river winds past willows just a few feet from my tent reflecting the red rock canyons. Unfortunately, I learned too late that across the river and upstream several hundred yards is a radioactive uranium mining tailings dump.

The site was operational from 1962 to 1984 and its legacy is a 16 million ton pile of toxic uranium tailings 90 feet tall. The tailings sit less than 100 yards from the Colorado River and the water supply for 30 million people in the southwest.

The Department of Energy now runs the UMTRA (Uranium Mining Tailings Remedial Action) project. Its objective is to move the tailings to a site about 30 miles north and bury them. So far, they’ve moved about half, and the project is expected to be completed by 2034 at a cost of around $720 million. 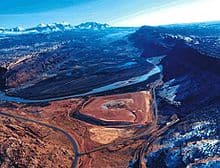 As the wind picks up I wonder about the tailings blowing down river toward my camp. The snow pack in the Rockies was low again this year, part of the ongoing climate drought. The river is down to 1500 cfpm, and the intake ports for site water are stuck in mud. River water is used to dampen dust on the piles, as well as inject fresh water underground to create a screen to keep radioactive waste from leaching into the Colorado. I am not reassured.

This site represents an ecological disaster of huge potential created by our own hubris. It’s a mess and, in our collective wisdom, we are trying to clean up the mess as best we can. As one dives deeper into the information provided by the DOE, one wonders how could we have been so foolish?

So I question the renewed zeal of the current administration and congressional Republicans to start uranium mining near the Grand Canyon in Arizona. We are assured that it will be 99.5% safe, that the Canyon Mine will provide 125 desperately needed jobs, and that it is necessary for our national security. Have they read that the area around UMTRA has a lung cancer rate 2 to 3 times the average for Utah?

Mining, drilling, and lumbering are not simple issues, though each side would have you believe so. On one side, jobs are the new crack cocaine. We will do anything for them no matter the consequences. Corporations know that if they promise jobs, the desperate masses will fall into line, especially if national security can be invoked. Most economists say that energy projects should be evaluated on cost and environmental impact and not jobs. Jobs are transitory and are often changed. In other words, one job is left while another is joined at the same time.

In the larger picture, never mind that we are gradually decommissioning our nuclear reactors as they age, or that Canada provides all the yellowcake we need. Perhaps we fear war with Canada and that is the justification for national security. Or perhaps we believe that we need more nuclear weapons as the current administration has demanded.

Nor is every mine or well an ecological disaster. But there is a law of proportionality and common sense in the American people. They don’t want their national parks destroyed for the profit of a few. Yet we are voting our identity politics straight down the line. Identity trumps sound policy. Maybe Americans simply don’t care what happens to someone else in some far away place. I don’t believe this.

The Canyon Mine, owned by Energy Fuel Resources, raises some serious questions. It is located seven miles southeast of the Grand Canyon visitor center. At 1500 feet deep, and within sedimentary rock, the mine could be a threat to the ground water supply for 750 Havasupai natives that live in the Canyon. Past that, what happens if there is radioactive leakage into the river itself? Maybe then the people of Los Angeles will ask, what were we thinking?

Years from now, will our wiser selves ask how could we be so foolish? How does this cycle perpetuate itself?

Not all extraction projects turn out like this, but enough do to pay attention. In the Grand Canyon mining situation, there are many similarities. We know that mining poses a risk. There are many examples of health consequences from uranium mining for the Navajo people. We know that any pollution of the Colorado has consequences for 30 million people. We are spending almost a billion dollars trying to clean up UMTRA. We don’t really need the uranium, and the prices are too low to support much mining right now. It’s not really required for national security. It won’t provide many jobs (125). Yet the Republican administration is acting in a hurry to reverse the Obama era moratorium to prevent mining in this watershed for 20 years. Perhaps to take advantage of a political window. Will they be in a hurry to pay the cost of any damage? Not likely.

We elect our congressional representatives to represent the best interests of the people. They work for us. Many do have our interests in mind and there is debate around issues. But when our representatives take money from corporations and support them over the interests of the people, it is called Fascism. The pendulum has sung too far in this direction lately. We are giving away our national lands to corporations where the benefits are marginal and when they may not be around to clean up their messes.

Uranium mining in the Grand Canyon doesn’t make any sense. Will we fail to learn from our past mistakes? It looks doubtful when there is a buck to be made and our candidates need donations from a corporate-government based regime for the next election.