I suppose the Bass-Oreno saved my life. Other than it’s preposterous name, all I knew about it was that it was made by the South Bend Bait Company of Indiana, and it caught bass. For a ten-year old, that was magic enough.

I found it a couple years ago in the attic with some other stuff I had saved from my childhood. Important rocks, sticks and feathers that have slipped into the past. But the Bass-Oreno lay protected in an old slide case, its faded green spotted body scarred by the mouths of so many fish. It looked less than fearsome now with its three treble hooks. To the boy who purchased the plug with his allowance, these hooks by themselves indicated that the lure would catch fish. Though I didn’t know then that most baits are designed to catch the fisherman and not the fish.

It didn’t require an alarm clock to wake up at 5 AM and slip into my clothes to walk across the dewy grass to Carson’s bay. The sleep of youth should be deep and unconsidered. The birds serving to raise consciousness twice each morning. First with the false dawn, and finally with the rise of the sun. Coming to the lake shrouded in mist with dust floating on the surface, meant that I had arrived at the right time. So did the cold from which I shrank inside my cotton t-shirt.

It was always the first cast that brought me control and respite from the chaos of drunken parents. The arms of their chairs scarred by cigarettes just like the lure. My last task at night was to extinguish them after they had passed out. They would not awake until noon.

The Bass-Oreno was quite heavy, so my skinny  arms could leverage it at the end of the rod. Using a Langley bait caster, I would bring the plug back over my shoulder and with all my strength hurl the rod forward, releasing my thumb just enough off the open face to allow the braided line and lure to arc into the morning. The plug would race toward the heavens chasing the westward darkness and then begin its descent.

In this quiet world, the next sound was a satisfying plop. It was suggested by Stuart Robb, my then often fishing companion, that I was not so much fishing, as stunning the fish into submission.

But I didn’t care, I was master of this universe, and I caught more fish than any kid I knew. When your world hinges on whether your mother found her meds, or your father managed not to crash the car, any amount of control in your life feels like safety.

I learned to drop the Bass-Oreno within inches of a the circular ripples of feeding fish. I mastered controlling the backlash when the reel spun faster than the escaping line and created a Gordian knot that took minutes to unravel. So I fished twice as much as Stuart who became an expert at undoing backlashes.

As kids we lived under the logical delusion that the biggest fish in Lake Minnetonka lived in the deepest parts of the bay. It only stood to reason. So we would sneak onto Reuben’s dock which gave us a twenty yard advantage and cast as far as we could toward the giant fish we imagined living down in the depths. Stuart always started with a Dare Devil spoon and claimed to be fishing for northern pike. When he didn’t catch anything he’d rotate through all sorts of baits; Lazy Ikes, spinners, divers and wigglers of all sorts.

Like life, each bait represented an approach to fishing. But all his baits were nervous. He would reel them and jerk them fast with the idea that this would intrigue the fish. The Bass-Oreno, on the other hand, was big, slow and ambling. It was a floater and would slowly waggle back and forth. I supposed imitating a frog. But it was irresistible.

One morning after sun rise, I decided to cast back toward the shore from the dock. I dropped the lure onto a small boulder near shore and then jerked it into the water as a frog might jump. The world exploded in a rainbow of spray, droplets glistening in the sun as a large bass took the plug.

Most of the bass I caught were Big Mouth, but only went two to three pounds. This one was a lunker. There are lots of epic fishing stories, all full of exaggeration and heroics. They  get bigger with age. But kids only see what’s in front of them. This was a big fish. We were excited. Catching a big fish gave us a sense of confidence and again, control.

When I had tired the big bass out and brought it closer to the dock, Stuart grabbed the net. Before I could say, “No, not yet,” he stabbed the net toward the fish. The fish bolted, wound the 12 pound test line around a dock post and broke the line. It took my Bass-Oreno with it.

At first I didn’t understand what had happened. Then I cursed in the language I had learned from my parent’s arguments. I sat dejected on the dock, mad at Stuart. My Bass-Oreno was gone.

I walked off the dock. Stuart asked where I was going, but I started running. When I got home, I grabbed a Mason jar full of change I’d stolen from my father’s dresser, and jumped on my bicycle. Lindy’s Hardware was a mile away. They carried South Bend lures and fishing gear. For $1.98, most of my ill-gotten gains, I purchased another spotted green South Bend Bass-Oreno, and rode hell-bent back to Reuben’s.

Stuart was still fishing, and when I returned, he was quiet. I rigged the new lure and cast. Bam, I had another fish. Another big one. This time I coached Stuart. Landing it we could see it was the same fish. It now had two Bass-Orenos in its mouth. Greedy bastard, I thought.

I took my original plug out of the fish’s mouth and put it away, then removed the new lure. I never fished with my original Bass-Oreno again and gave it a well-deserved retirement. The fish went to Stuart, and though we had no scale, we both agreed that it weighed over six pounds. Stuart estimating it could go eight. All this was sixty years ago.

Recently, I took a trip back to the bay on Lake Minnetonka. The lake is no longer clear. The ice goes off the lake three weeks earlier each year, and this is an ominous sign. The bay is full of milfoil and other invasive species. The shallow areas are full of toxic algae from fertilizer runoff. I too have changed, and am now old and scarred like the Bass-Oreno. But I rented a small fishing boat from a marina on the western shore and headed back toward the bay of my youth.

Perhaps I’ve been feeling out of control and needed saving again. I’ve kept both my original Bass-Oreno and its cousin, but I brought the cousin along.

Reuben’s dock was gone, as was Reuben’s house. In its place was a new McMansion and a huge cigarette boat. It was still early, the water flat as glass. I took the Bass-Oreno and clipped it to a leader, and I cast it next to the rocks along the shore. 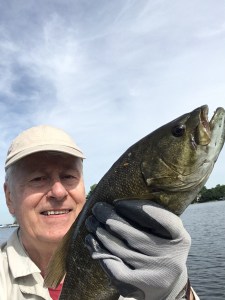