A Good Day – Running from Ghosts

A Good Day – Running from Ghosts

Wyoming. Two brothers, 7 and 10. Rolling plains ahead. 350 miles to Yellowstone. No electronics. Boredom.

Someone said there is no sibling rivalry without parents. It is either a Darwinian or biblical battle going on in the back seat. So I wonder if the boys will kill each other, or simply maim one another? 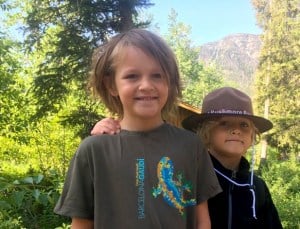 Cool. What are pronghorns?

Technically they are not antelope. Antelope live in the savanna’s of Africa. But these pronghorn are wild. Animals not entirely controlled by man. So they hold some fascination for kids. Oh, wow, says the younger brother.

I suggest we see how many we can count. Each boy takes a side of the car to watch. We set twenty-five as the goal, but soon raise it to 100, then 200 as we see more and more. The boys become more adapt at spotting the terrain where the pronghorns might be. We also see fawns, and I explain that they mate in September and carry until May. Now in June, the grass is green and the hills are full.

We see a small group of males running, and the older boy asks why they are running. They can run up to 55 mph and maybe faster, and they can run for a long time. I explain that there are no predators that can run that fast, and ask the boys why they think the pronghorn runs? For fun, says the young soccer player.

They are running from ghosts, I answer. Pronghorn have been around since the Pleistocene which allowed for hundreds of thousands of years of evolution. Nature doesn’t create a characteristic like speed unless it is required for survival. But if you look back into time, you can find the bones and fossils of a North American Cheetah as well as a type of long-legged Hyena. These are what the pronghorn runs from. These are the monsters that haunt their dreams.

Now their survival is more assured with populations of 500,000 to 1,000,000. In the early 1900’s they came close to joining the Cheetah and Hyena. Man had hunted them almost to extinction. Then the Boone and Crockett club began steps to preserve them. Attempts to save small fenced herds failed. The animals didn’t like the fences. Apparently there were no fences in the Pleistocene.

Larger land areas were set up in preserves and their recovery began in the 1940s. Now there appear to be more pronghorns in Wyoming than people. Though I wonder whether some sheep pandemic could quickly wipe them off the earth forever.

We aspire to be the dominant species on earth. We have the hubris to think we can control nature. When I ask the boys whether they’d rather be a cheetah or a pronghorn, they each say cheetah. But then they hesitate. In the inimitable ways of kids, they change their answer to ‘both.’

The pronghorn is still with us, though our own survival is not assured.