A Tale of Two Ranches

A Tale of Two Ranches 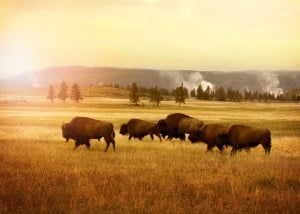 I have always been fascinated by maps. Imagining what places may look like from their names. I am heading west in search of the Buffalo Gap National Grasslands. What I believe to be a vast area of tall prairie grasses waving in the steady breezes of South Dakota. Endless horizons, cumulus clouds piled to the sky.

I turn down a dirt road toward a large green area on the map, but I am not seeing what I should. After several miles I find a truck in my rearview a couple miles back, so I stop in the middle of the road. I wait while the dust plume gets bigger and a pickup appears.

A rancher rolls down his window and squints, “Can I help you?” I tell him I’m looking for a place to camp in the Buffalo Gap. Turns out he leases the grasslands for his herd and will show me a place to camp. I ask him how big his ranch is. He says, “I run about 300 head on 6000 acres.”

I look around. “Where are your cows?” He points west, “A couple of miles.” I follow him to a slight hill, he opens a wire gate and lets me through. I thank him and wave goodbye.

Cresting the hill, I park and get out. It’s early evening, the sun two fingers above the horizon. I look at the ground. It is parched and scarred hardpan. One single blade of grass, a patch of dirt, a cactus and a cowpie.

My first thought, there’s not much to graze on here, no wonder he needs 6,000 acres. Then I feel sadness. Where are the tall grasses? They are gone. Destroyed. This is practically a desert. As federal lands, you and I own them. Does anyone know what’s going on here? I sit down to watch the sun set and the stars rise.

I don’t blame the rancher. He struggles to make a living. But I am disappointed and feel somehow violated. Of course, I have been naïve.

A couple dozen miles to the west, is Dan O’Brien’s ranch. O’Brien also started out raising cattle, and almost went broke. He had 160 acres, and one farmhand. A combination of circumstances and a gift of a dozen Buffalo calves changed his life.

Backing them out of a stock trailer in a blizzard one night, he soon noticed that the calves oriented themselves ass-end into the wind. Ten thousand years of evolution had taught them how to survive on the plains. Cows would have died.

Gradually he learned how well adapted they were. They didn’t eat the grass to the roots, they moved pastures. The buffalo could find their own water in dry stream beds by digging with their hooves. They didn’t crap where they drank. And using their big heads like snowplows to get at grass beneath the winter packed drifts, they fed themselves. So O’Brien gave up cows and went full buffalo. He replanted his ranch in native grasses. You can read his story in his book, Buffalo for the Broken Heart, which I highly recommend.

But the other part of this story is what happened to his land when he replanted and began natural harvesting of the buffalo. This process allows hunters to take the animals on site, and then dress the animals on the plains, leaving the remains to work themselves back into the earth. This provided nutrition for the soil and a variety of animals that came rebounding back.

He began to see badgers and foxes. Birds, from grouse to partridge to white-crested sparrows and hawks, reappeared. Antelope mixed in with the buffalo. The rushes around ponds became homes to red-winged blackbirds.

The land became fertile again. Varieties of bluestem, switch grass, Indian grass and buffalo grass now drive their roots down six feet or more. There are fewer spots of hardpan. Now he raises about 300 buffalo on 3000 acres and leases a chunk of the national grasslands to let them roam in winter.

Someplace in these two ranches is a story about what we’ve forgotten. Our farms are nearly mono-culture now, mostly corn and soybeans. Gone are the varieties of rye and oats and barley we used to raise. Now, we mostly raise a couple kinds of animals, beef, pork or chicken. Maybe this is OK. But it makes us vulnerable. Look what happens when the bird flu burns through an area. Or what will happen when ever increasing temperatures reduce the corn and bean yields? Cows don’t do well in the prairie heat either. There is a reason nature is diverse. The Lakota who lived and survived off the plains for thousands of years knew, and appreciated this.

We have sacrificed our resilience for a few more dollars when we can’t use the money to buy what we need. A little more contact with the earth and nature, a few more species for a few more years. We can still restore the earth, and I’m not talking about just cattle ranches.

PS: Support the Endangered Species Act, before they modernize your future out of existence. Do one thing now. Call your Senator or Representative. Tell them to save the Act. 87 percent of Americans agree. Thanks.