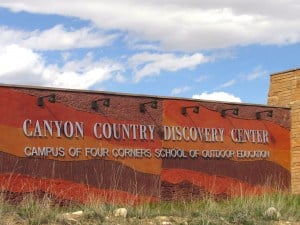 The first day, I drive 850 miles. The second 500 miles. The third day, I ask myself where am I going, and drive 250 miles. It’s hard to slow down, unplug. I am programmed like a pelagic shark to keep swimming. I put my phone in airplane mode. It’s hard not to want to check it every five minutes.

I’ve given myself a couple months to recharge and reconnect with the earth on a journey through the southwest. The first lesson I am learning is that U-turns are OK. With no destination and no timetable, I allow myself to turnaround when I see something interesting. It seems obvious but I am a creature of compulsive action.

Now, I am turning around in the small town of Monticello, Utah. I’ve past the Canyon Country Discovery Center, Campus of Four Corners School of Outdoor Education. What catches my eye is a wind farm on the hill behind the center. I count 27 turbines. Smaller than the ones I’ve seen in Texas. There’s a story here. This seems an unlikely spot for renewable energy. 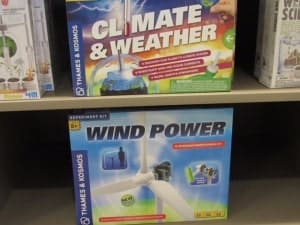 Inside the center, I ask if anyone knows about the wind farm. I get a couple of shrugs from two young clerks. I walk around the center and wind up in the gift shop. Setting there, at kid’s eye level, are two science kits. The positioning seems ironic, but encouraging. There may be hope.

I wander out behind the center looking for a shot of the turbine farm where I run into April Baison, an energetic woman with short gray hair and a few lines in her face. She is the center’s education director. I introduce myself, and ask if she can tell me anything about the wind farm. She knows her stuff. 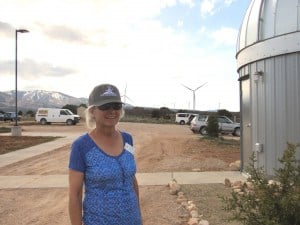 It’s called the Latigo Wind Park, she says. Named for a strap on a saddle. The project cost $126 million to build minus about $11M in Federal tax credits. The farm is owned by S-Power of Salt Lake City. How much energy does it produce I ask? The payoff is the 62 megawatts of power the turbines generate. About enough to power 10,000 homes. The 282 foot towers use GE turbines and start to turn when the wind hits between 9 and 12 miles per hour. They shut down when the speed hits 57 mile per hour.

April tells me more about the project and the Hawk Watch International survey being conducted. Hawk Watch has been contracted by S-Power, the project builder, to run bird mortality surveys. She says they have observers at each end of the farm who can shut down the farm when a golden eagle enters the area. Apparently there is a slow shutdown and a fast shutdown mechanism depending on the nearness of the birds. To me, this sounds like progress and a real cooperative effort.

As we stand there, we watch a raven fly into the area. It’s at the level of the turbines, and I ask if they are going to shut down. April says, no. There are no spotters today. She says, that one of her colleagues swears that she saw a raven teaching its young how to navigate the maze of blades. We watch nervously as the bird does just that. Coincidence, luck, or animal learning?

I ask her how the locals like their wind farm. April hesitates, then says, it’s a horse apiece. They thought they might be getting some benefit from it, but the power has been contracted to be sent hundreds of miles back east. S-Power claims it will pay $10 to $15 million in property taxes to San Juan County over the next 20 years as a result of the project. Unless you’re a land owner, the locals don’t benefit much.

As we stand looking at the giant blades spin, she says something interesting to me. You know, the lifetime of these things is only 20 years. I wonder what the lifetime of a coal plant is. More than that. I wonder if we have twenty years. According to the American Wind Energy Association, Utah gets about 1.6% of its energy from wind.

April gives me the contact information for Steve Slatter of Hawk Watch and we say goodbye. I am left with a couple of impressions. Wind power is happening. Birds are in the mix. Locals may or may not benefit.

We live in strange times. An administration bent on trying to turn back the clock. The technology of wind, solar and storage making huge leaps forward and people looking for answers.