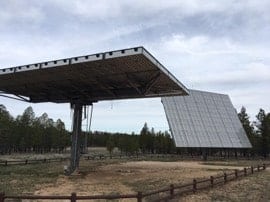 I am on a journey through the Southwest. Looking for a little solitude in the desert.

The solitude is offset by my conversations with strangers. Where are you from? Isn’t the earth amazing? Which eventually leads to… How do you see the environment?

Today, I met Ranger Pete. I met him because right outside the Bryce Canyon National Park Visitor Center I spot a big solar array. That seems unusual; a national park powered by solar?

My thought, “If the National Parks System is harnessing solar, why can’t the rest of us?”

So, I pull in, meet Ranger Pete, and ask him some questions.

Pete is from Chicago, a big city kid with an interesting story that brought him to Bryce. He was in the Air Force and requested assignments in Japan, Europe and other exotic spots. Instead, he was assigned to Hill Air Force base just north of Salt Lake City. He’d never been west of the Mississippi and wasn’t too excited, but he fell in love with the west. 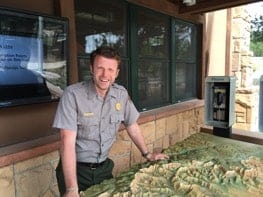 After leaving the military, he headed back east and went through Arches National Park on his return to Chicago. In Chicago, he started a career in videography. His watershed moment was two job interviews on the same day. One in Chicago and with the National Park Service. For security he picked Chicago. But kept thinking about the west. Six weeks after accepting the Chicago job, Pete realized his mistake and called his current supervisor at the NPS. His position was still open. He headed west.

The solar installation (pictured above) is a concentrating photovoltaic technology CPV that runs at 34% efficiency. It also tracks the sun, generating 400,030 KWh/year. More than that, it saves 340 tons of CO2 annually.

When I asked him how much money the solar array saved, Ranger Pete answered, “about $40,000 annually”. His only regret was that the electricity goes back into the grid because they don’t have a storage battery system yet.

I also asked him about climate change. The official handout says, “Bryce Canyon is already experiencing the effects of global climate change. Sixty-five years of weather data from our National Weather Service Climatological Station documents this.” Pete said that he hasn’t been here that long, but the park has noticed two big changes. The first is the number of days where the temperature goes through a freeze thaw cycle. It used to be around 200 days per year, now that number is down to around 180 days. The freeze thaw cycle creates the famous ‘hoodoos’ in the park. He also said that with increased CO2 concentrations in the air, the limestone in the park is now undergoing erosion from carbonic acid when it rains.

Clearly, there is no denial going on here. It encourages me that the NPS is making progress and trying to protect the earth.

Finally, I asked him about whether being a park ranger is a good job. He said it was great. He gets to hike and be outside. I asked him about the pay. He paused and smiled, “There’s a saying that half your pay at the NPS is in sunrises and sunsets.”