Environmental Messaging: All Stories Are True

Environmental Messaging: All Stories Are True 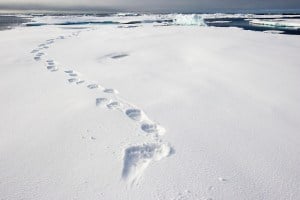 Once, I was traveling through Qamani Tuaq in the Kivalliq region of what is now Nunavut, the former Canadian Northwest Territories.

I met an Inuit native there whose name was Ikutaq (or some close approximation). He might have been twenty or seventy, the elements chiseling their harsh breath on his face. I asked him if he had seen any polar bears, and whether it was safe to travel on foot.

He gave me a long stare, as if I’d asked him about quantum physics. Then he told me a story. He and his cousin had been hunting near Chesterfield Inlet. They were going to see if they could find some seal, but the wind had pushed ice up on shore. It was piled in car-sized blocks. This was happening more often then. They couldn’t rely on going out on smooth ice anymore, unless they went a month earlier. It was a bad sign.

It had begun to snow. They say the Inuit have twenty words for snow. I don’t remember the word, but this was a wet snow coming from the sea. The sky was gray. The ice was gray. The water beyond was a black ribbon on the horizon. He and his cousin abandoned their snowmobiles and walked toward the ice and the heaving flow beyond. As they walked, they came across bear tracks.

It was not unusual for someone to spend days out hunting. There is no sense of time in the arctic of the Inuit. Ikutaq went back sometime later with three other men. A high pressure system had cleared the gray. They found the tracks of his cousin and the tracks of the bear. His cousin might have spotted the bear, maybe even shot at it. He followed the bear’s tracks around a large mound of ice. They could see where the bear doubled back around and attacked his cousin from behind. There was a great deal of blood and some scraps of cloth. They didn’t find his cousin or his rifle.

Ikutaq could have simply answered my question, “No, it’s not safe,” and left it at that. I still remember this story, years later. I imagine what it might have been like to be in a bear’s world, with no time, at the edge of Hudson’s Bay.

The ice is disappearing. The world is changing. A bear is coming for us. Tell stories.

We are all connected.