As big as Keystone XL and DAPL, do we need another pipeline from the world’s dirtiest source of oil?

I sat through most of the testimony in the public hearings on Enbridge’s request for a “Certificate of Need” for their Line 3 oil pipeline replacement in northern Minnesota. Arguments on both sides were passionate: I was struck by how easily we are guided into false choices, and how large corporations seek to divide us in order to get what they want.

A false choice is exactly that. It’s a “frame” that presents two sides of a small part of an issue. Often it seems to encompass the whole discussion, while at the same time missing the most relevant issue. The assumption is that winning on a single point means that the whole argument is won. So if I ask, “What’s the best use of Johnny’s future potential, playing baseball or soccer?” I may miss the bigger issue of Johnny’s schooling, for the sake of arguing about which is a better sport for him to play. It doesn’t mean the smaller issues are irrelevant, just that there’s usually an elephant in the room that we should be paying more attention to.

There were lots of false choice arguments at the St Paul hearing before Administrative Law Judge, Ann O’Reilly. Here are the top three.

While this seems like an important and logical issue, it fails to ask the question of why we need to transport oil in the first place. (More on this later.) We are presented with crashes of oil trains and trucks on one side, and Enbridge oil pipelines spills on the other.

Humans aren’t very good at risk assessment. We fear flying when it’s statistically safer than traveling the same distance by automobile, because we visualize the catastrophe of a plane crash over that of a car crash. When Enbridge presents this argument they are asking us to visualize the fire bomb of an exploding crashed rail car. It turns out that bitumen by itself is not explosive. It depends on how it is diluted. And that depends on Enbridge. It also turns out, according to studies, while more frequent, oil spills by rail car are smaller, more well contained, and easier to clean up, pipeline spills are often much larger. Ask the people in Kalamazoo, Michigan. Nevertheless, this frame seems to support pipelines.

False Choice 2: If we don’t put in the new pipeline we will lose hundreds of new jobs.

Jobs are the dominant narrative of industry. When we argue jobs, we are arguing on their turf. We don’t get a chance to talk about our values of the dignity of human life, and health and fairness. While it seems logical that a project will create jobs, this statement frames the jobs question as an absolute. Either we get these jobs or we will have zero jobs. It fails to ask what other jobs are available with similar investments, or what quality jobs we want. Or even what jobs at the cost to our planet. Jobs are the new crack cocaine offered by corporations. Job creation was a lynchpin in the Trump campaign. You hear companies pitting states against each other to locate new plants for the sake of huge tax concessions, regulation suspensions, and other benefits. We see this with Trump’s bid to bring back coal mining jobs. Aren’t there better paying, healthier, and safer jobs than coal mining?

Today, renewable energy jobs can provide this opportunity. We live in the Saudi Arabia of wind. Wind Energy jobs are growing at 20% and Solar at 12 times the national job growth rate. They require similar skills as pipelines. The question should always be how are our values supported and what kind and quality of jobs, for how long, and at what cost?

False Choice 3: If we don’t replace Line 3, the risk is that we will pollute our water. 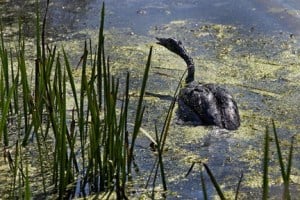 This presumes that a new pipeline will mitigate these risks and shifts the argument to whether the Line 3 replacement is safer. It fails by skirting two big issues. Again, the first is whether the oil is needed. The second is shifting the debate to water pollution as opposed to air pollution.

The indigenous tribes of Minnesota, and those that started a pipeline resistance movement at Standing Rock, used water pollution as their focus. Their rallying cry is Mni Wiconi, “Water is Life.” It’s a great theme. It’s short, clear and understandable. But it frames the argument as one of water pollution only. While water pollution is very important it misses a simple fact. When the products of the Line 3 replacement are used, they will spew over 1.2 megatons of CO2 into our shared atmosphere every week for forty years! This is certain pollution, the equivalent of putting forty coal plants in Minnesota. It will contribute to the bigger issue of warming our atmosphere. Jim Hansen, a former NASA scientist, says that if we burn this dirty tar sands oil that is being transported by Line 3, “It’s game over for planet Earth.”

This is the bigger issue. One that should drive our discussions and decisions. Our task is to make it local and urgent.

The question is what are the consequences of a rapidly warming climate? A recent study, HEAT IN THE HEARTLAND: Climate Change and Economic Risk in the Midwest concludes:

“On our current path, the U.S. will likely see significantly more days above 95°F each year. But by the end of the century, the average Midwesterner will likely see 22 to 77 days per year over 95°F, compared to only 3 on average over the past 30 years.” What they’re saying is that Iowa and Minnesota are going to get hotter than Washington DC is now in the summer!

In February of 2016, 18 scientists at led by Berhadt Schauberger, published a peer reviewed study in Nature Communications. Here’s their conclusion.

“For every day above 86 degrees Fahrenheit, crop yields decrease by about 0.6%. Annual yields of corn, soybean and wheat could decline by 49%, 40% and 22%, respectively, compared to yields under today’s temperatures.”
When calculating the impact of this on Minnesota crop production it amounts to over $2B in loss of crop yields and $20B for the United States. This doesn’t include the loss of indigenous wild rice due to warming.

These are the bigger issues. The question is “Whose needs are we considering when looking at a certificate of need for Line 3?” Are we considering the needs of a private corporation or the needs of the rest of us, including Minnesota’s 74,000 farmers and their ability to feed us?  We have wind energy and solar energy to help us with a transition away from these dangerous sources of carbon. It’s time we made the right bets on our future to restore the earth. We need to look at the bigger issues and not just the false choices in front of us.

We Are All Connected.