The Creatures Among Us – Bandits

The Creatures Among Us – Bandits

I grab the cute raccoon pup by the scruff of the neck and think I’m about to drop him into a pillow case. The pup has a different idea. He turns inside his skin and begins to rip my arm to shreds while shrieking with ear-splitting screams. At the same time, he emits a skunk like musk that gags me. My younger brother stands ideally by. I drop the animal, and it’s now loose in the house. Our black lab barks wildly and struggles to jump out of his pen. 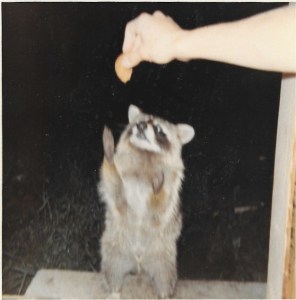 The idea of taming a wild raccoon seemed innocent enough. We had been sitting at the dining room table when we first heard the garbage can lids fall to the ground. My father sent me to investigate. Two large raccoons were feasting on our garbage. When I returned and told my father, he told me to “get the pistol” and “shoot it”. I was twelve. It was an order.

I followed one bandit down into a ravine and watched it crawl into a twelve-inch culvert. Looking into the pipe with a flashlight, I could see its trapped whiskered face looking back at me. I point the gun and then stop. It doesn’t seem right.

Returning to the dinner table, my father asked me if I’d shot it. He knew I hadn’t. I told him that I couldn’t shoot the raccoon in a culvert, that it would plug the pipe. Then I explained a better plan. I would gather our table scraps each night and feed the raccoons so they would stay out of the garbage. It seemed to me like a good compromise.

My plan had a couple major flaws. First, one of the raccoons was pregnant. Second, wild animals can become dependent on humans. In a month, we had eight raccoons, two adults and six pups. To feed them, I started buying dog food with the money I earned mowing lawns. The next year we had twenty-four raccoons. Apparently word had gotten out.

They would all assemble on the back deck at approximately 6:30 PM and wait patiently to be fed. En mass, they were quite impressive. A congress, if you will. I would feed the pups with peanut butter on cracker and ask them what they had done with their day. They told me what was happening in the woods behind our house.

But unfortunately, their population reached a saturation point. They were beginning to offer themselves up to be turned into pancakes by passing cars on the road nearby. I made a decision to stop feeding them. But before I did, I convinced my brother that we would tame one as a pet. We built a cage of chicken wire and put it in the basement.

As I wipe blood from my bleeding wrist, I instruct my brother to get a blanket to throw over the screaming animal. We surround it, throw the blanket over it, and finally install it in its new home. Ten minutes later my brother informs me the animal is out of its cage and we do the drill all over again. It seems raccoons are smarter than my brother and me at finding the weaknesses in our cage. Because the animal is now hiding, my brother thinks it’s a good idea to enlist our dog in the hunt. Lots of chaos, shelves knocked over, a couch shredded, and we are back where we started.

Ten minutes later, after re-wiring the cage, Houdini makes another escape. This time we find him sitting and looking out the door where I first grabbed him. I open the door and kick him out of the house.

We can not tame or exploit nature. When we try, we suffer the consequences. A balance in the earth is disrupted. I have scars to prove it. If twelve year olds know this, why don’t our leaders?