Fear Versus Urgency in Climate Communications

Fear Versus Urgency in Climate Communications

The real debate around the climate crisis is not whether it’s happening, but how to get people to act. So the most important question for climate communicators is how do we create urgency and action without creating paralyzing fear or apathy.

One side, catalyzed by David Wallace-Wells article in the NYTs, The Uninhabitable Earth, paints a clear and very scary picture of the future we face if we do nothing. Our polar ice caps are melting and more than 375 million people will have to move due to sea level rise. Many of these are in US cities: New York, Miami, New Orleans, Houston and others. Increased temperatures will drastically reduce our crop production by up to 50%. Drought and heat waves will become more common. Mass extinctions are threatening our own existence. Tropical diseases like Dengue and Malaria are spreading northward in the US. Forest fires are burning California to a crisp. Huge storms threaten our southern coastal cities.

In an interview, David Roberts, a writer for VOX, makes the statement, “People ask me if we are screwed. My answer to them is how screwed do you want to be?” The rationale for the fear argument is we should be scared witless and this will cause us to act.

On the other side, we have better empirical data from cognitive scientists on how people respond to fear. In other posts, I’ve summarized fear as an attention grabber, but not a great tool for creating action. It often results in fatigue, indifference and apathy. Multiple studies support this assessment. Images of emaciated polar bears create reactions of disgust, helplessness and not action. Nowhere do I see the use of fear more than with the newly converted.

There is no passion like that of the newly converted. When it comes to the climate crisis this is especially true. While we need the passion, we are anxious to shout our new knowledge and awareness from the rooftops. Unfortunately, we often confuse the need for urgency with fear and proselytization. We are anxious to share all the facts, as well as the doomsday scenarios. Our gut instinct is that by yelling louder, more frequently and with scarier stories, people will see what’s going on and do something. We believe that people are persuaded by reason and facts.

Reason and facts rarely convince anyone of anything. Cognitive scientists tell us that they are a response developed to justify the positions we arrive at intuitively. If you doubt this, think back to your last Thanksgiving Day conversation with Uncle Ralph that ended with, “I’m right and you’re an idiot.” By following this path, reciting facts and spouting fear, we are less effective than we could be. But what can we do instead?

The answers aren’t entirely clear or settled. To my way of thinking, they are directional. On one hand, fear has some positive benefits. It helps create attention and awareness. It helps size the action that we must take. Yet it is what we do with this awareness that’s important.

People lose hope and interest when they believe their actions are too small or too late to have an effect. Recycling plastic bags will not save the polar bears or keep the ice caps from melting. Neither can we give in to resignation. “If there’s nothing I can do about it, then I’m going to try to live my life as best I can.”

Some say that hope is the antidote to fear. But providing Pollyannaish scenarios about a bleak future isn’t helpful either. It allays the urgency. We need to be realistic. For example, one thing we can do is acknowledge the scope of the problem. In our interactions and team meetings we can say, “Let’s take a minute and just recognize the enormity of the problem we face. Now let’s see what we can do to do our part.” Giving voice to our fears and the enormity of the problem makes the next task easier. Since the climate crisis is huge and complex, we can often only work on a portion of it. Working on part of it, and acknowledging its enormity defangs the beast as being unsolvable. We need to remember that the problem is manmade and so are the solutions.

I was talking to Michael Foster who spent six months in jail as one of five “Value-Turners” who shut off all the dirty tar sands pipelines to the US for a day. I asked him what we could do. I’m paraphrasing, but he said, “We’ve already lost. It’s too late.” Then he added, “But you get up every day, and do you what you can, because you must. You do it for your kids, your friends and family. Because it’s the right thing to do. It’s the only thing to do.” Courage is ordinary people facing fear and still doing extraordinary things. For me, Michael’s courage is inspiring.

In the face of overwhelming odds, whether it is turning valves, marching in a protest or making smart energy policy, many small actions require courage. They serve as inspiration to others. In this, we create a positive identity. One that focuses on the underlying values of caring for others. We don’t need to become stuck in persuading others through fear, but through action and community. Fear is a form of persuasion. The communities that we create can assuage the fear in the face of great odds by attraction, not by persuasion. Simply, we are in this together. Together we have power.

We also know that stories are powerful when it comes to attracting others. Nothing beats a good story; not facts, not reason. One area we could improve our stories is by celebrating our heroes. Look at the young Greta Thunberg as an example. Her message is lead, follow or get out of the way. The celebration of the courage of our environmental and energy heroes is required to inspire others to action. If there is one simple thing you can do for your organization’s communication, it is to celebrate the work that they do for the earth and our climate. Tell their stories. Create more heroes.

The next step is to measure progress and not absolutes. This is the classic glass of water example, is it half full or half empty? When we use fear as the only measure, the glass of water is always half empty. Rather we should be measuring progress. As an example, my adopted state of Georgia has about 2% renewable energy. It is disheartening. There are lots of entrenched forces and special interests working against adding more renewables. It’s a tough challenge. What I tell my colleagues is… that Minnesota, where I grew up, is now at 25% renewable energy and will be at 40% within 6 years. This is a measure of progress. We can argue whether it is fast enough, but saying that if we don’t achieve 100% within 12 years, we should just give up, is ludicrous. We achieve a goal and then set another goal. We are relentless.

Progress is driven by potential and positive intent. As a culture we respond to challenges and leadership that helps us see a better version of ourselves. Nowhere is this potential bigger than in the climate crisis. For example, appeals to the potential of renewable energy and climate justice help move us toward action.

So the options look like this. The first option is to beat people over the head with fear. Shame them into action, but create fatigue, indifference and apathy in the process. The second better option is to attract people and create community. Acknowledge the scope of the problem and create small calls to action that can be rewarded, acknowledged and celebrated. In doing so we will create more heroes, measure our progress and involve a larger community. 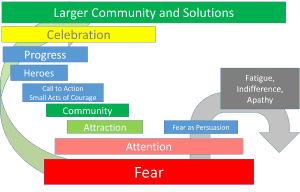 The next time we want to use fear alone as a motivator, my suggestion is that we ask the following questions.

Or we can continue to use fear without action. That hasn’t worked very well over the last 30 year.