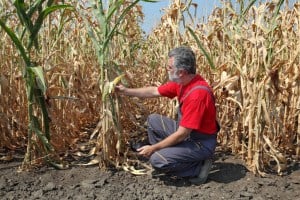 Farmers are connected to the earth physically, economically, and spiritually. They understand what’s going on with the earth and have for six thousand years.

I am talking to a friend of mine who farms in Iowa. It is pheasant season, which is mostly an excuse to walk the land. We are in tall yellow grass along a small creek. We stop for a while and lie in the grass looking up at the dark blue sky. The dogs flop down with us. It’s a good day.

We went to school together and have taken different paths. I ask him if he’d do it again. Become a farmer. I think he didn’t hear my question and am about to ask it again when he answers, simply, “Yes.” There is some reservation in his voice. I press him, “And?”

He says, “It’s not what it used to be…” then adds, “Maybe I’m not what I used to be.” Reticent, he slowly tells me about what is happening to farming. It may be a familiar litany; higher fuel, fertilizer, and seed costs, small farms squeezed out, more people taking a bigger chunk of the profits. He says his kids aren’t interested in the life. He thought his oldest boy might. He pauses for a while, “And, it used to be that I just prayed for rain. Now, I don’t know, it’s more than just the rain. Everything is changing. The weather always does. But its different now. The growing season has changed.”

“Why do you do it,” I ask. He answers. Not prone to poetry, he says, “Look around you. I wouldn’t want to be anywhere else. It’s beautiful.  A thousand shades of khaki. Hard. Unforgiving. Beautiful. I’m so busy, I sometimes forget, I’m not in control.”

Later I am reading an article in Nature Communications* and I think I understand why he says things are changing. It says yields of corn, soybean and wheat could decline by 49%, 40% and 22% respectively by the end of the century compared to yields under today’s temperatures. Yields drop by 0.6% for every day over 86°F.  This article is authored by a seventeen scientists, some at the Iowa State University in Ames, and has sixty-three articles cited in references.

I also read in the Des Moines Register, “By the end of the century, the average Midwesterner likely will suffer through 22 to 77 days a year of temperatures above 95 degrees, compared with only three on average the past 30 years.” In fifteen of the last sixteen years we’ve broken global temperature records. No one made this up. It’s a verifiable. Iowa and the Midwest are at ground zero. 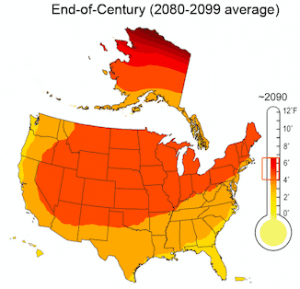 I decide to do a little calculation on the economic consequences of this. I look up corn, soybean and wheat yields for the upper Midwest for 2015 (USDA). I select the lowest prices over the last five years for each crop from FarmDoc (U of Illinois). Here is the table I come up with.

The bottom line is that the upper Midwest will suffer a minimum of a $3 Billion crop loss in just these crops over the next ten years. Iowa is three quarters of a billion dollars.

There isn’t a single farmer in the 86,000 farms in Iowa that doesn’t know something is happening. They don’t talk about it. They don’t use the words ‘climate change,’ but they know it.

I think of the Dakota Access Pipeline cutting across Iowa, and the Keystone XL cutting across west of there. Most of it destined for export. Together they will put 3.2 million tons of CO2 into the atmosphere every week. 6.65 gigatons over their lifetime. But what is a gigaton? It’s a number too big to imagine, so we just ignore it.

There are arguments that can be made. Isn’t CO2 good for plants? The study says only marginally. Water helps. But we know what’s going on with the water tables. The numbers don’t reflect outright drought. Maybe we will develop new crops, though scientists say we are at the limits governed by the basic physics and photosynthesis.

So I wonder about our new president’s energy policy of opening up the DAPL and KXL. Yes, the DAPL and KXL aren’t responsible for all warming. Yet the pipelines don’t really bring many jobs. Maybe 75 jobs to maintain the KXL. The people I talked to working on DAPL are from out-of-state; Florida, Texas and Mississippi.

On the other hand, Iowa leads the country in wind energy, 35% of installed capacity. Wind and solar energy are now cheaper than coal. 60% of the dollars spent on renewables stay in the state. Maybe we should be saving the oil for tractors? Nobody’s arguing we don’t need some oil. But like the land, shouldn’t we conserve it?

The economic numbers go up if you extend them over the forty-year life of these pipelines, or that the states considered only represent 60% of the total US yield for the crops. The numbers just get bigger, $10 Billion and $20 billion.

This appears to be Trump’s “Slow Death Tax” on farmers. Who is going to pay for that? Why can’t we talk about this? It seems we are being suckered. Pipelines aren’t about jobs. They seem to be about lining the pockets of the big energy companies.

Farmers know that it’s not called harvesting if it takes more than a year or two to regenerate the earth. We don’t harvest oil. We don’t grow more oil. But the sun and wind are there. Maybe Iowa farmers will figure out a way to save our sorry asses. But not with a drill baby drill energy policy of the current administration. And first we need to save the farmers.

My friend keeps a boundary next to the creek where we walk. It helps keep the water clean. Don’t we need some boundaries for our air? We all breath from the same place. There are reasons there are environmental regulations. Nature doesn’t negotiate. Farmers know this.

Now we need to pray for more than rain. Or less rain. Or cooler days.