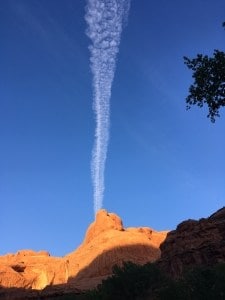 I am camped at sunset in the canyons of the Colorado River, surrounded by massive red cliffs, when I look up. It appears I am witnessing a geological event: the first new volcano in millions of years. Volcanoes typically suppress global warming by reflecting the sun’s heat back into space. This is significant. I need to report it. Perhaps it will be named after me, but first I need to move my camp.

I follow the plume up into a dark blue sky. Then I see another plume, and another. Holy crap, they are everywhere. One in particular is growing and, when I look closely, I see the distant silver glint of an airliner at its source. Contrails. My excitement dissipates as slowly as the white exhaust.

On of the days to come, while hiking in the desert, I look up to see more contrails. They are ubiquitous. I don’t recall seeing these twenty years ago, but they are in almost all my photos. There is no clear blue sky. It’s a little harder to feel the solitude when reminded so often of civilization. There are so many, I wonder how much they affect the climate. 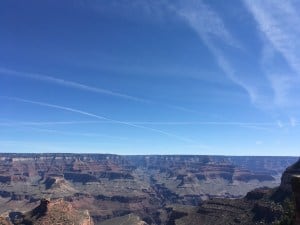 Contrails are cirrus-like clouds, created when moisture forms ice crystals in jet engine exhaust at high altitudes. A little research leads me to two theories of their effect on climate. The first comes from research during the days following the September 11, 2001 terrorist attacks. For three days following the attacks, all commercial airlines were grounded. Data from this period indicates that contrails artificially depressed the difference between daytime and nighttime temperatures. Like volcanos, the reflectivity of the contrails decreases the maximum surface temperature by up to 6 degrees Fahrenheit, and trapping nighttime heat by about 5 degrees Fahrenheit. This is known as the Travis theory. Later, Gang Hong, an atmospheric scientist at Texas A&M seems to have determined that the temperature swings were within normal range of variability over decades.

In the first case, it would seem that contrails are artificially depressing the effects of global warming. In the second case, only that other conditions existed that accounted for these changes. Like many cases in science, a hypothesis is created and tested and then verified by others. At this point we don’t know which is the true case.

However, there is something we do know to be true and proven. That is the effect of manmade CO2 on global warming. We are releasing millions of tons of carbon that has been locked in the ground for millions of years into our atmosphere. Sort of like running the car in the garage with the garage door closed. Ignoring the suppression effect, I wondered about the impact of airline travel?

We made 8,727,691 commercial flights in 2015, according to the FAA and Bureau of Transportation Statistics. (Holy crap again!) We fly a lot, and I find an animation of this which is fascinating in itself.

More research. A Boeing 737 flying from NY to Phoenix roundtrip uses 6,900 gallons of jet fuel and produces about 145,000 pounds of CO2. A little more than a Prius. After a few calculations, it appears we put 90 megatons of CO2 into the air every year in the USA for commercial airlines. We are conducting the world’s largest aerial spraying experiment. So this is clearly having some effect.

Finally, a little more digging and it appears that flight contributes about 2% of global manmade CO2 emissions. About 781 million metric tons spewed into our air. I read where the airline industry is expected to double flights by 2035 and triple by 2050. That volcano is looking better all the time.

So what is an airline traveler to do? I’ve thought that I could buy carbon offsets and often have for airline flights. But does this just assuage my guilt? There are a number of good articles on this subject out there. Flying often accounts for the largest single item in one’s personal carbon footprint. The consensus is that offsets help, but the biggest thing is to simply fly less.

If I fly less, even with offsets, my impact on the earth is less. I can do that. The last set of contrails that affected life on earth was from the asteroid that wiped out the dinosaurs.