We Have the Word “Drought” All Wrong

We Have the Word “Drought” All Wrong

I was in the great Southwest in April. I drove north up 84 toward Las Vegas, New Mexico glad to finally have a 40 mph tailwind. Halfway there, I ran into a tumbleweed storm. Hundreds of dusty rolling aliens flying across the road like some herd of strange frightened animals from a sci-fi movie. It was a sign.

I looked forward to crossing over the Rocky Mountains on 518 and sliding down into Taos. In past years, before the pandemic, I’ve run into snow in the lush ponderosa and piñon forests, but as I approached the mountains, I saw smoke.

This was the beginning of the Hermits Peak/Calf Canyon fire. Still small at 10,000 acres, I got the last room in a town already full of firefighters. The fire was started by a “controlled burn” that had more burn than control. I didn’t know at the time it would grow to 300,000 acres or 22 square miles. Five weeks later it is still only 41% contained even though almost 3000 people are still fighting it. Over 15,000 people have been evacuated and 650 homes and structure burned to the ground. Winds continue to blow and spread the fire.

As humans we are really bad at evaluating risk, and our capacity for absorbing the consequences of catastrophe are worn dull. The Hermits Peak/Calf Canyon fire is only one of three big fires in New Mexico. It closed my favorite road forcing me to detour. No consequence.

Yet these things are happening “down there,” and I will add “not here,” where ever here is. They are happening to other people. So we don’t pay much attention. This is part of our limited capacity to predict risk and harm or even feel empathy for those effected.

Symptomatic are the words that we choose to describe the root cause of the fire. Words are important. We carelessly attribute the cause to drought. But what is a drought?

A drought is “a prolonged period of abnormally low rainfall, leading to a shortage of water.” That seems pretty obvious. But there’s something implied in the term drought.

That is that it will someday come to an end. It will rain again, and things will return to normal. This seeds the idea that all we have to do is tough it out and wait.

Only the reality is that this lack of water is a permanent change. Things will never go back to normal. Already moisture conditions are worse than they’ve been in 1200 years.

The media has taken to calling this a “mega-drought.” Not much help. But the consequences of the word choice drought keeps us from acting. Not only acting on water allocation so 30,000,000 people can still have drinking water, but on the core cause of the drought, human induced climate change. Fires caused by human induced climate change. The word drought then becomes a frame that limits our thinking and response.

Is there a better word than drought? I don’t know. Perhaps desertification? The desertification is moving east across the great plains at 15 miles per year. That doesn’t sound like a lot, but think about those farmers in western plains using the last drops of the Ogallala aquifer to water their crops. The “drought” will be in Omaha and Kansas City within a lifetime.

So maybe “Human Induced desertification.” Or if you prefer something even more direct, “Fires caused by human induced climate change as a result of people burning shit.” 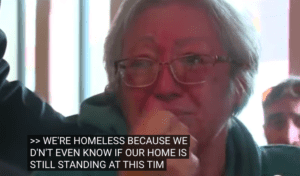 I am left with the image of a woman and her husband I met in Las Vegas. They have been evacuated. Their dog and a few of their worldly possessions rapidly thrown into the back of a Ford Ranger. It’s not an old Hudson converted into a truck, but the expression on her face might be the same as the Joads.

I wonder what will happen when people abandon the west? They will migrate east just as the poor Joads migrated west during the dust bowl. Perhaps they will be pissed. It won’t be like heading west where there was land and opportunity.

There is still time to act. To choose our words. To slow the human induced climate change causing desertification. Here are a few ideas that I put together for my community.

Thanks for what you do.