The Two Most Powerful Words for Change?

The Two Most Powerful Words for Change? 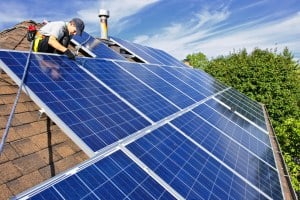 A friend of mine told me that I was a romantic. I had to look it up. It wasn’t much help.

If you’ve ever had a literature course, you might remember the “hero’s journey.” One of the things required for a hero’s journey is a challenge or an obstacle the hero has to overcome. Sometimes this challenge is external, and sometimes it’s one of the hero’s own devising.

In the first case, we may have a reluctant hero, in latter, a willing participant. In both cases the odds are usually stacked against a hero. Dragons and that sort of stuff.

So what motivates a hero? Why take a risk? Reward? Sometimes. Many entrepreneurs start this way. But for the romantic, it is the quest itself. And the romantic must ask themselves a question. These two words start every new venture, startup, idea, or discovery. Here’s an example.

There’s a program in my adopted town of Decatur, Georgia that shows that Americans are all about renewable energy.

It’s called Solarize Decatur, and it’s a consortium with the goal of getting 100 Decatur homes to use renewable solar energy within six months. Members include the Sierra Club, Environment Georgia, City of Decatur, Solar CroudSource, Creative Solar, Hannah Solar and Georgia Interfaith Power and Light.

To put the challenge into perspective, Georgia Power has run a solar program for five years and now has five installations. If a billion-dollar utility can’t do it, what makes anyone think they could do better? Yet, here are the results of the program so far:

In a town of 20,000, over 850 homesteads signed up to have their houses and businesses evaluated for solar. Estimating two and one-half people per household, that’s 10.6% of households that are interested in participating.

To date, the program has 70 signed contracts. Once installed, that’s 510 kW of aggregate capacity, and one million tons of CO2 avoided!

The people in this program asked one question with two words. They asked, “What if…?”

Georgia Power failed to ask that question. Why? Because they don’t like change. They don’t want to take risks. People need to realize that large public utilities often only give lip service to renewables and do so reluctantly. In many cases they lobby against net metering (selling your electricity for what you pay the utility for your electricity) to put in programs that de-incentivize solar and wind. With solar and wind becoming cost competitive, legislators and public service commissions need to be reminded of this, or they’ll wind up sticking it to consumers. They need to ask what if…?

Entrepreneurs have a romantic streak in them. They see the potential, not the negative. The quest becomes the reason to take on tough odds. Otherwise they would never accept the challenge.

Who are the people behind this movement? The neighbors who stepped up and asked, “What if I had Solar on my roof?” Who is the person behind the Decatur Solarize Decatur? Congratulations to Don Moreland, the Founder and driver for this effort, and his organization Solar CroudSource. He not only asked the question, but had the courage to pursue it.

What if your city ran a program like this? How much could we save?

If you want change, ask yourself, “What if?”

*Thanks as well to Creative Solar, Hannah Solar, GIPL, The Sierra Club, Environment Georgia, The City of Decatur