The Stuff We Carry

The Stuff We Carry 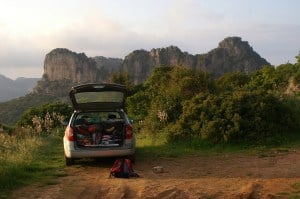 We all have a lot of stuff. Perhaps for evolutionary reasons, we are programmed to accumulate stuff. Maybe, the more stuff we have the more likely we are to survive?

Now we even have storage warehouses, where we can store our extra stuff because we’ve run out of room. It’s not stuff we really need, but it’s stuff we think we might need… someday. We even have disease names for storing too much, compulsive hoarding disorder.

Of course, the question is how much stuff do we really need? This issue is not only personal; it is societal, as well as economic.

Getting ready to wander in the desert for two months, I am faced with this dilemma. Do I really need three backpacks or will two do? How many books should I bring, or can I just use audiobook on my phone. Two foam pads would be more comfortable than one. These are trivial choices. I will probably take as much as my car will hold. And from there I formulate “Stocking’s Law of Stuff,” after Parkinson’s law; “You will have as much stuff as you have space for.”

As a society we measure our value and status based on how much stuff we have. I’ve spent 30 years in marketing and can say that our economy is based on buying more stuff. We are programmed daily with thousands of messages designed to make us buy stuff. Our economic drivers are all based on this growth. And we measure this growth with money.

But, it seems, we are reaching a point where growth for growth’s sake may be harming us. It doesn’t seem to be making us any happier. The US ranks fourteenth in the world in 2017 on the well reported Happiness Index. Countries like Norway and Denmark ‘trump’ our “US exceptionalism” ranking one and two for happiness. We rank second just after Saudi Arabia in consumer goods consumed, while Norway is 7th and Denmark a distant 22nd using about half what we do.

We are told we are granted the right to life, liberty and the pursuit of happiness. So, happiness might be one measure of a society.

The problem of stuff comes back to us in several forms. First, it doesn’t seem to actually make us happy. Second, it seems to be damaging the earth. There are factors limiting our growth based on the limits of natural resources and our current energy sources. The concept of an unlimited world for our exploitation is coming to an end.

Our current administration is only accelerating this process. They favor polluting forms of energy and are blocking the path to clean renewable energy. It’s clear that it’s policies favor only a few. These same few control the wealth in this country. The top 10% of the people in this country own 76% of it’s wealth. We have the highest wealth inequality in the world, and this trend is only accelerating. The grift is that by pumping and fracking more fossil fuels (much for export), it will be good for the economy. It will trickle down and everyone will buy more stuff. The trickle down process doesn’t work. Witness the wealth gap and the fact that corporations have more cash on hand than ever and that they know what to do with. The price we pay is a world that is becoming more inhospitable to life.

There is the “freedom” thing. We each get to do what we want, including hoarding more stuff. There is also the ruse that if I have my stuff, you should also have an opportunity to get your stuff. If you don’t, it’s your fault. Upward economic mobility in this country is less than it is in Norway and Denmark.  Maybe we should just spread the stuff we have around a little. (Please don’t start with the love it or leave it frame.)

Change is coming. For now, we have new viceroys for coal and oil. That doesn’t make me happy. It won’t make anyone else happy either, but we’ll work around them.

So I think I’m going to get by with less stuff. Not because I have to. Because I want to. What do I really need? Family, friends, and a place outside to honor the earth.